Well it’s nearly over, our two weeks of blissed out sunshiny whateveritwaswedid. Most of my classmates took off for foreign shores: Copenhagen, New York, Istanbul, Montreal, Seoul… I stayed in Parma, mostly, just to be different. And just to have a look round the galleries and museums and churches which I haven’t done, waiting as I’ve been for a visitor to do it with. And I finally had one and here are some of the things we did:

Visited Osteria del Gesso, one of the local thumbs-up dineries. I had a very good meal there, but an even better one a night or two later at Ristorante Mosaika, a little placed I’d walked by a few times and had been wanting to try. We both had selected menus (I had the meat, Meli had the fish) and they were, in our favourite word, celestiale. They started us off gently with some deliriously fresh and beautiful balsamico-drizzled buffalo mozzarella, and delicate rounds of crostini with fresh green pesto; moved us smoothly on into starters (a wonderful rabbit terrine, and a salt cod puree whose salad came with a stunning soy-wasabi dressing) and pasta (gorgeous gnocchi draped with lardo, and a delightful tagliatelle freckled with fresh green herbs and strewn with shellfish)

and mains (tender white sea bass with clams and olives, and for me, meltingly pink lamb); 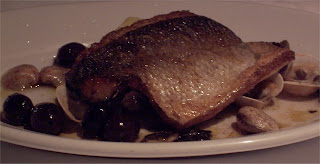 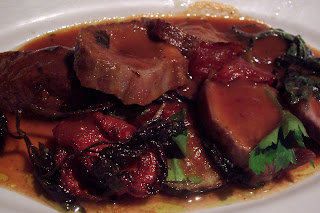 polished us off with warm, soft chocolate cake… 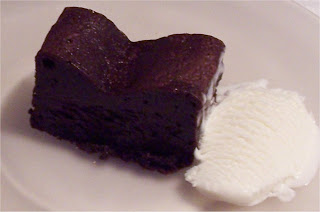 and for me a nest of perfectly ripe strawberries tossed in citrus and served with gelato.

To work all that off, we went nutria-spotting, checked out some puppets, popped our heads into the Baptistry, the Duomo, and every other church we came upon, except the desanctified ones (which were several); had walks in the Parco Ducale and Parco della Cittadella, sampled gelato from Grom and K2, had a drink in Web ‘n Wine, saw the Aga Khan masterpieces exhibition and peeped round the corner into the Teatro Farnese.

Then a day in Bologna, where we saw the Museo Civico Medievale and the Museo Morandi, the Chiesa San Stefano, the Basilica di San Petronio, and still had time to stumble upon an excellent pizzeria and have a sampling of gelato (from Gelateria Gianni, branches which seemed to materialise at every turning). We expired on a sofa somewhere and had a drink and a few olives before returning to Parma. Where we planned our assault on Milan the following day.

Of course we visited first the Duomo, and then wandered about looking for lunch, which we found at Bellavista Cafe – the food was excellent – the seafood plate disappeared a little too quickly to capture; 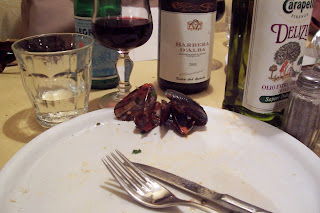 the pizzas looked amazing as they went by; the apple cake was delightful. 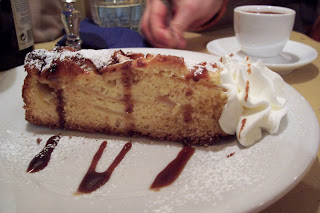 We then ambled through the Castello Svorzesco for most of the afternoon and never really got to the end of it. Meli had an hour to sprint round the Pinacoteca di Brera while I rested my feet and sipped a spremuta d’arancia.

And then Meli took to the skies from our very own Aeroporto G. Verdi, where the approach roundabout must have the best topiary ever: 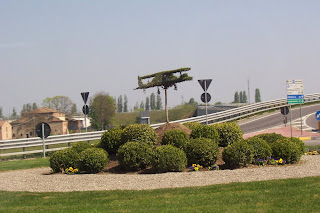