The blackberries have been calling me and I have been answering by the bucketful. These are, as I have said before, Himalayan blackberries, and they are the ones everyone thinks of when you say ‘blackberry’. They’re big, fat and in season from August through September. 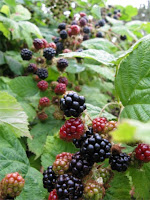 The native blackberries, smaller and trailing, are now finished. They ripen in June and July and are very much worth the hunt. It might take three or four times the picking time to fill a pail, compared with Himalayans, but theirs is a different, more intense flavour.

Himalyans are not native to BC; they were brought to North America by Luther Burbank and have spread throughout the land with joy and vigour. The plant is highly invasive, and you need to practice extreme caution about putting any part of it into your compost. Moreover, as I saw happen during this spring’s ground-clearning at Haliburton, new plants can and will sprout from chopped stems. Perhaps if you decompose them for a while in black plastic bags, or make sure they are completely dried out they’d be safe, but they’re nasty and prickly any way you look at them so I think send them wherever you send other pernicious weeds. And don’t put berries into the compost either (birds and gravity put enough of them around).

Anton finds picking days Very Boring. He is like any 13 year old: if he could speak, his first words would be, Can we go now? 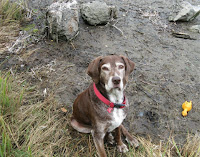 One excellent use you can put this booty to is a clafoutis (or clafouti), which I maintain is the righteous ancestor of the food known as impossible pie. Both these dishes are a kind of starched custard that creates its own base while enfolding the main ingredient in a soft eggy filling. They appear in both savoury and sweet versions; the savouries make good quick quiches, while the well-known coconut pie is an excellent dessert. Last night we had a blackberry and apple clafoutis which was exceptionally good. This recipe – which uses apricots and raspberries – is a good one to base it on. Serve it warm, but it’s not bad cold. 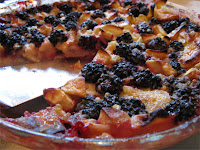 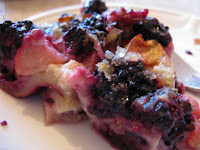 4 Responses to Easier than pie