I was by coincidence invited along to the last ever Grapevine event last Thursday. 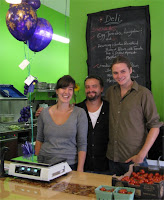 The Grapevine was started five years ago by a group of entrepreneurial women who thought the best thing they could do for small businesses in Victoria was to bring them customers. They selected from among the best new small businesses in town and organized “grapings”, where a bunch of people from their 400-strong mailing list – usually numbering around 20-25 – would meet at a nearby location and walk to the graping point. They used all means licit and illicit to trick the owners into being their for their visit, so that they could have a chance to meet some consumers and tell them a bit about their business. The idea was that those who came to the graping would let their friends and colleagues know about it, and the organizers posted articles and photos on the website to spread the word. Simple, beautiful and now over, sadly, 5 years and 42 grapings later. 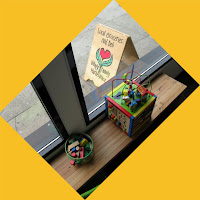 This last one was at a place I’d wanted to visit anyway: Village Family Marketplace is Victoria’s latest local food emporium. Seven young partners have pooled their resources and talents to start a grocery store downtown, where it might be difficult for locals to make it to farm shops or find good local produce. Two of the partners, Dustin and Justine, walk us through the history 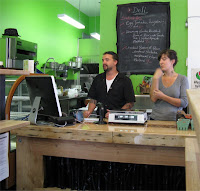 and explain that everything they sell is either grown or produced locally. They’ve only been open for three weeks so the shelves are not yet as full as they will be. The professional kitchen in the back is geared to produce deli items, ready meals, condiments and treats to fill the display case. They have frozen goods including local organic meats, as well as dairy and produce, 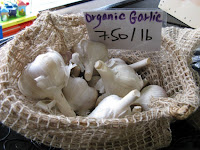 a few items you won’t find everywhere, like purslane and lemon cucumbers and kelp

and a few dry goods. The group has dolled up a standard shipping container

and equipped it with coolers to add capacity; there are play stations for children; and they’ve build picnic tables so that one day there can be a place to relax out back. The interior makes use of reclaimed timber.. for example in the handsome front counter with its arbutus inlay. 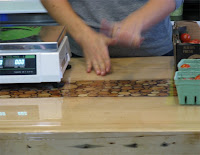 So.. a happy morning spent poking round the shop and I’ll be making a return visit before too long. Not difficult since one of my other favourite food shops, the spectacularly well-stocked Mediterranean deli Blair Mart, is just about next door – and its courtly owner the Village’s landlord.

One Response to Definitely not sour grapes