Does food matter? And the birds and the bees.

So does food matter? If so, to whom? Why not to everyone? How do you make people care, or what should you expect them to do to prove they care? I’ve been asking myself many such questions in recent weeks.

I’ve been to two less-than-crowded gatherings lately, organised with the purpose of showing politicians in the provincial election that the voting public cares deeply about its food and about agricultural issues affecting food production. Apparently the current government correctly deduces that the public is not concerned enough to show up en masse, and so neither must they. No Liberal politicians bothered to accept the invitation to come and defend the government’s record at the legislature rally or the all-candidates forum on food security last week.

It’s odd, because if you ask around, you do find a lot of people out there who do seem to care, and who are acting on their concerns by buying local foods, supporting local farmers, growing their own food; vegetable seeds and starts are selling in record numbers; restaurants and shops that specialise in local foods are springing up like weeds. But then again, when I peek in the carts of my fellow shoppers in grocery stores, I see convenience foods; imported out-of-season fruits and vegetables; highly processed foods laden with hfcs, preservatives and fats; cases of pop, and generally a totally unsustainable lifestyle carrying on around me. And a miniscule percentage of the public turning up at food and agriculture rallies.

Farming Today, the straight-on BBC Radio 4 program on farming issues, talked honeybees last week. You can catch the full week’s worth – which includes an interesting exchange about the part that pesticide group neonicitinoids may play in unexplained bee deaths – for another six days. This week it’s on to chickens…

It’s definitely turned into spring here. My new mason bee house filled up a week after I mounted it on the fence 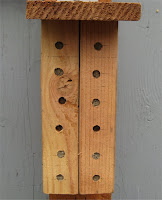 so I’ve added some high-density housing 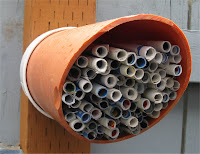 along the lines of what Haliburton uses; I think I need to cut the tubes down in mine so they’re better protected from the elements. 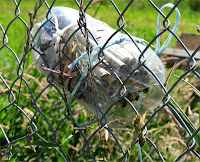 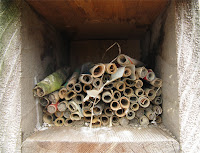 Haliburton has also brought in some wireworm specialists to help with integrated pest management in the fields. They’re young but willing.

And finally, a walk through the woods proves the arrival of spring: Trillium in bloom 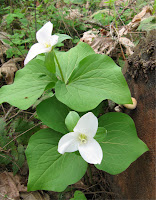 and food on the hoof: salmonberry 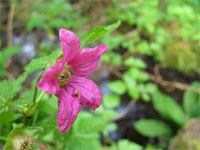 and oregon grape both in flower. 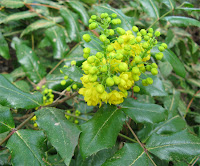