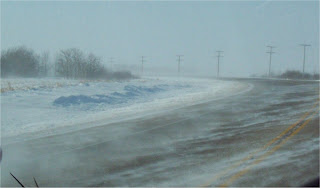 It’s all about the weather here. Today started sunny and clear and is now grey and cold, cold, cold. The forecast is for a wind chill temp of -41c (or a not entirely desirable -25 out of the wind). I think the chickadees will have to wait for their hand feeding a few days longer.

Before leaving for the monastery, I indulged in a good but not ethereal meal at Saskatoon’s own Nouveau Brit restaurant, Simon’s British Flavours. I was intrigued by the sound of the cheese and butternut squash souffle, but it was a shrunken little muffin 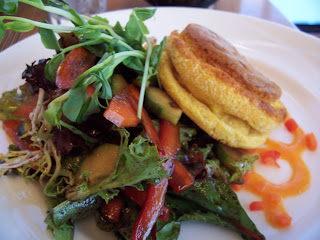 when it reached the table; clearly either the cook or the souffle had not read Delia’s opinion that souffles with vegetable puree can never fall flat on you. It was tasty enough, but I think I’d do some home experiments before trying this again in a restaurant.

Then after valiant work on her part, the last morsels of Mary’s itty-bitty lamb shank 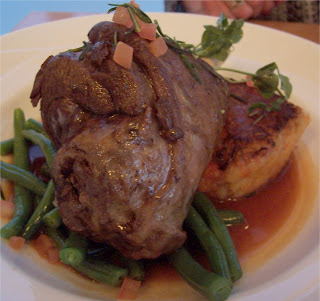 defeated her, while I managed most of my nicely cooked (humanely reared) chicken, although I could have done without cream in the veggies. 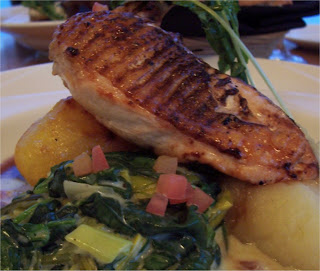 We couldn’t manage dessert, or popcorn when we reached our next destination, a screening of Juno, which we agreed was appealing enough as a movie, but not what either of us would call Oscar material.

Then it was off to the east, and although there was a bit of blowing snow we managed to reach Muenster without incident, just in time to witness the start of a good snowfall, which fell a bit short of the blizzard I had been hoping for. 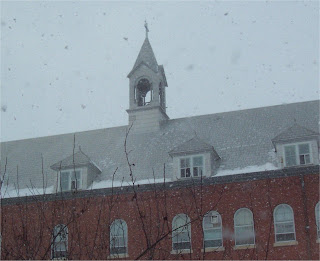 There has been some discussion of snow since I’ve been here. One term I learned was “finger drifts” which are the long, finger-like drifts that creep across roads. A less descriptive one was “ground drifting” which refers inadequately to the sweeping, snaking rivers of dry flakes that blow across the highway, causing a kind of hypnosis if you’re not careful. I liked Cherie’s suggestion to change it slightly to “snake drifting” (although this term seems to be already taken by car idiots who like to fishtail around parking lots) — which would work for this kind: 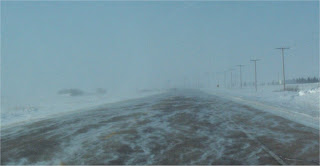 but we need a straighter term for this kind: 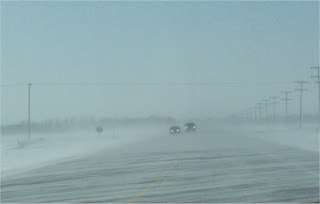