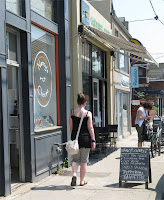 I was thinking it would be nice to take some Eastern cheeses back west with me, and when I asked about cheese shops, Sandra suggested Nancy’s Cheese on Dupont at Spadina. I duly sweltered along there in the late morning heat of departure day, and was able to take a good long look at the current offerings while Nancy set up an order for someone’s cheese tasting party.

I was pleased to see the cheese selection was relatively modest 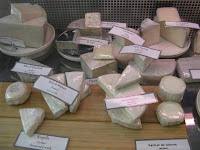 – decision-making is hard enough – and Nancy 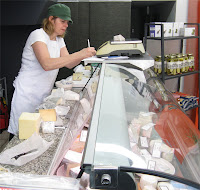 was generous with the samples and her knowledge.

It was mostly Ontario and Quebec cheese – just what I was after – plus a few well-chosen foreigners (Parmigiano-Reggiano, Gruyère, Brie de Meaux (raw milk brie), Aged Beemster). which I didn’t buy, but I came away with a good and interesting selection: 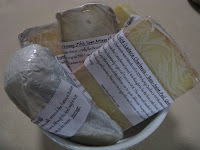 I like the informative labels and look forward to sharing…