I’d heard about the charming Italian film Bread & Tulips and finally got around to watching it; I am a Bruno Ganz fan from way back so was delighted to see him here playing a depressed Icelandic waiter in Venice…why not?

And I have been thinking generally about bread, even as the price rises due to the upturn in grain prices. One thing I learned something about over last summer was bread, having escaped the horrors of Emilia-Romagna’s all-crust-no-crumb-local-speciality pane comune 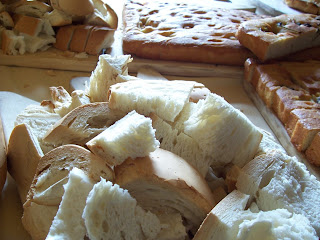 (and to be fair, the delicious chewy well oiled and salted focaccia, and its puffy little cousin gnocco frito/torta fritta) 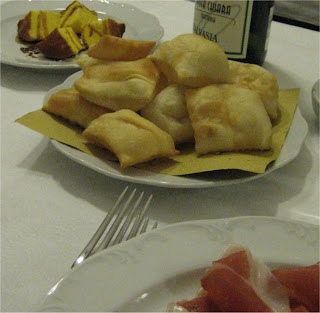 and when in London indulged heavily in Euphorium.

There is a bit of a campaign going in the UK over real bread making, because it seems the industrial producers are putting a few extras in their loaves to make them appear fresher longer. Enzymes are one thing, amino acids are another (and from some questionable sources according to one writer I came across) and there is some toe-curling new jargon to learn while you’re at it: doesn’t ‘bread improver‘ sound like a dandy thing to put in your dough? I guess the trick is to sort out which of these are added as nutritional aids and which as materials that help bread makers to produce a more saleable, longer-lasting product. The latter by and large seem to make the bread less nutritious and less, well, bread-like, while the former has had its share of controversies around food adulteration.

There’s a British baker, Andrew Whitely, who is working hard to increase understanding about bread. He feels that some of the industrial bread-baking processes are behind the increase in gluten intolerance, and that if we were to eat properly made bread from sourdough cultures rather than high-speed leavening agents and their associated additives, there would be a substantial decrease in the wheat-related illnesses about.

I’ve just bought the American edition of Elizabeth David’s classic tome on the subject, English Bread & Yeast Cookery, which includes lots of background on the history and tradition of grains, milling and bread-baking over the centuries as well as contemporary and historical recipes.