Bees knees and labelling of GMO produce – it exists!

I was trying to regain a bit of poetry in my life by looking through a birds & bees-ish poetry collection that’s been by my bed for a few weeks now. I belong to the Poetry Book Society which brings surprising books into my life every few months. This one was Weeds and Wild Flowers, by Alice Oswald, which is a beautiful-looking book as well as another skilled collection of poetry. See how she describes a snowdrop:

A pale and pining girl, head bowed, heart gnawed,
whose figure nods and shivers in a shawl
of fine white wool, has suddenly appeared
in the damp woods, as mild and mute as snowfall.
She may not last. She has no strength at all,
but stoops and shakes as if she’d stood all night
on one bare foot, confiding with the moonlight.
…

And as for bees, Seeds of Diversity Canada has a campaign going to try to find out just what pollinators we have out there. Pollination Canada has a downloadable kit to allow you to be a Pollinator Observer and take measure of the bees, beetles, birds and other critters out there helping plants to propagate. There’s another organization, the North American Pollinators Protection Campaign, which also aims to help endangered pollinators.

Back to the battles with crawlies: Haliburton has been fighting wireworms 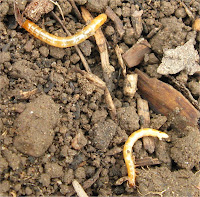 for a while. Lately these little devils have developed a technique of attacking cucumber seedlings by crawling up the stem and sucking the life out of them, so they end up keeling over like this: 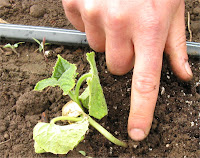 The organic solution is to use potato bait, for a wireworm loves nothing so much as a nice feed of spud. So the farmers have been cutting potatoes into pieces, skewering them with wooden skewers, and burying them near the seedlings they’re trying to protect. Every so often you just pull them up by the skewer and pick out any perpetrators for a swift dispatch. Results: 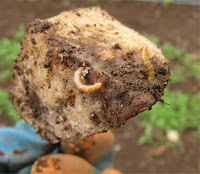 Meanwhile, I was thunderstruck – delightedly so – to learn that despite the best efforts of our legislators, there is in fact labelling of genetically modified foods in North American produce sections! Who knew? But if you check the Produce PLU – A User’s Guide 2006, you will find the following right there on page 17:

We owe this to the International Federation for Produce Standards, for establishing PLU (Price Look-Up) codes, which are 4- or 5-digit numbers primarily used on fresh produce items and typically appear on a small sticker applied to the individual piece of fresh produce (info from the Produce Marketing Association). My lingering question is how much GMO produce actually gets labelled in this way, when it’s still something that is only, by law, done voluntarily in this country.