A week spent with environmental literati from around the country and beyond was stimulating, delicious and rather warm at times. The first ALECC conference since pandemic times was, as they say, an intimate affair – not everyone who could have attended was yet willing or able to rub shoulders – but protective measures such as masked indoor events felt safe and comradely.

Tuesday, the evening before the conference began, Mari-Lou Rowley, Katherine Lawrence and I read from our new collections to a live (masked) audience who joyously filled the reading space at McNally Robinson, with another 35 or so attending online through the magic of live streaming. 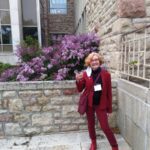 On Wednesday, Mari-Lou and I attended ALECC’s opening reception (the food was excellent and plentiful) and caught up with some familiar names and faces. Ariel Gordon, Tanis MacDonald and Kit Dobson read from their new books with Wolsak and Wynn, and the “Confluence” exhibit by Susan Shantz was on throughout the conference in the next door gallery (her talk on Friday night, “Confluences of Water, Art and Science,” with collaborator Graham Strickert, was excellent) 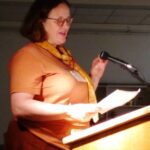 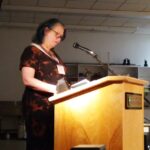 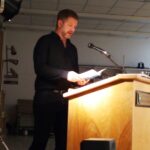 Thursday I was teaching online all morning and turned up in time for the first of two Poetry Walks, with Ariel and Tanis. It was much fun – we walked along a walking / running trail, stopping at intervals to read poems to our followers. Ariel borrowed one of ALECC’s helpful balloons to guide us. 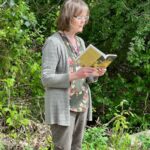 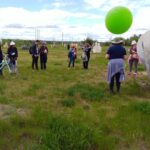 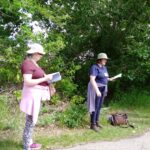 Tanis and Ariel under the cottonwood trees 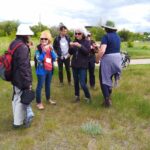 We pause to sniff some wild aromatics 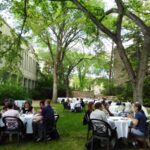 The setting for our Thursday night barbecue dinner was stunning; a hidden grove on the campus of our host organization, the University of Saskatchewan. The prairie dogs (Richardson’s Ground Squirrels) appeared not to have found this space, busy as they were gorging on the drifts of elm seed that covered much of the city… another sign of trouble, since trees shed seed when feeling stressed and needing to secure their genetic futures. 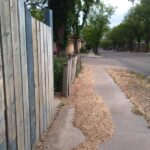 A river of elm seed on a Saskatoon street 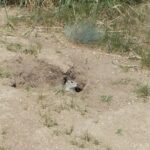 Friday was a long and rather warm day, temperatures starting to climb into the high 20s. Technical difficulties interrupted a video session, but it was all low tech for readings in the  “Ceremony, Desire, Requiem: The Poetics of Water and Land” panel. Sheri Benning kicked off with a reading from Field Requiem (starting with the beautiful “Winter Sleep” which was featured in film form on the Paris Review website last winter). Self-described “Indiginerd” Tenille K. Campbell followed with a passionate romp through poems from Nedí Nezu, and some straight talk on some realities of indigeneity in northern SK.

Saturday was a hot one, with temperatures forecast to reach 36c, so I was delighted to find we had a good following for our final poetry walk. Ariel, Tanis and I were joined by Lisa Bird-Wilson who read work about residential schools, while we read mostly environmental poems including a couple by Victoria poet Yvonne Blomer, who had planned the event but was unable to attend. 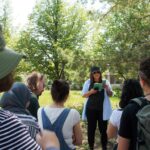 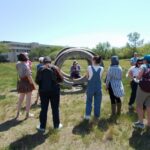 Ariel reads, in the Sculpture Park 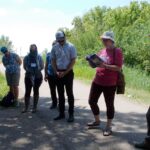 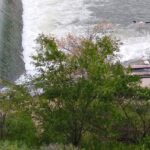 At least the pelicans could chill in the South Saskatchewan River

I’ll be lifting off on Monday – first trip off Vancouver Island since 2019 – and flying to Saskatoon, where I’ll be reading at 7pm on Tuesday evening with two fabulous Saskatchewan poets, Mari-Lou Rowley and Katherine Lawrence at McNally Robinson Booksellers. It will be livestreamed for those who can’t make it! The event link is right here on Facebook. 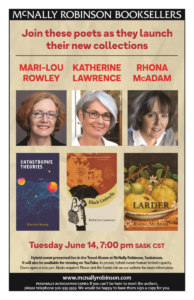 Comments Off on Next stop: Saskatoon 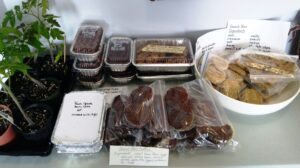 The bake sale! We did it! The final menu featured 21 different items baked by six local bakers. Of these items, 19 were gluten-free, 20 were dairy free, 15 were vegan and 2 were raw foods.

Grateful thanks to the bakers, to the shoppers, and to the people who donated funds that got us to an eye-popping $1000 by the end of that long and tiring day! Funds went to Red Cross Canada’s Humanitarian Crisis in Ukraine. From the generosity shown, it seems I was not the only one wanting to stop anguishing and actively support something.

A number of those who stopped by were unable to eat gluten, and expressed delight at having so many options to choose from at a bake sale.

Here is what we had on offer, just so you know what you missed, if you missed it: 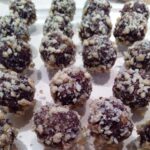 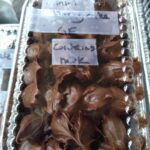 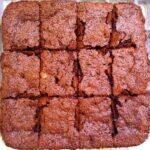 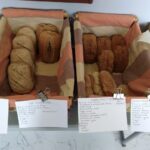 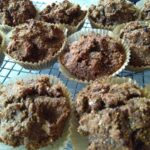 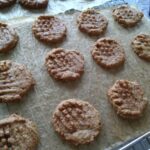 Comments Off on Bake Sale Update – The Final Tally!

The Poetry of a Healthy Bake Sale

The News has become a dark place, and February 24 was a darker day than most. For a couple of months I felt crushed, dodged war reports, hunkered down in helpless anguish.

Then one day an email dropped into my inbox from The Real Bread Campaign, reminding me that there was indeed something I could do. I could bake!

I managed to enlist a few other like-minded bakers, and an idea was born. A healthy baking bake sale! 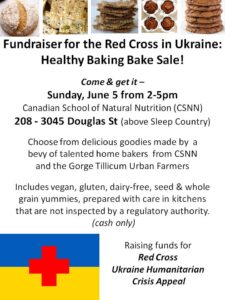 And so it will be, this very weekend. We’re defining healthy in any way we choose; the only condition being an ingredient list so buyers can decide if our views match up.

I’m still deciding what to make. So far I’ve made some favourite crackers – cassava flour – and some sourdough flax crackers. Planning to make some banana bread (GF) and some chocolate-coconut truffles; some muffins; maybe if there’s time some cookies too.

Our bakers include CSNN grads and GTUF members and I thank them for their generous donations of food and time. Quality cooking takes quality ingredients, and great care. I’m hoping we’ll get a good turnout on Sunday afternoon and be able to turn over some needed funds for the Ukraine Humanitarian Crisis Appeal. Any leftovers will be donated to a local community kitchen or two. 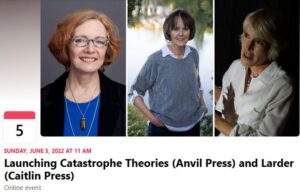 You’re all invited, wherever you may be!

A virtual and geographically diverse launch event on Sunday June 5 at 11am (PST): Rhona McAdam launches Larder from Victoria; Mari-Lou Rowley launches Catastrophe Theories from Saskatoon; and Lisa Pasold hosts us from Paris.

It’s a joint presentation by our BC publishers, Caitlin Press (Qualicum) and Anvil Press (Vancouver) through the magic of livestream technology.

No matter your time zone, enjoy brunch with us (11amPST) or lunch (12pmCST) or late lunch (2pmEST) or aperitifs (7pmBST) or supper (8pmCEST)— and let us feed your minds!

It will be livestreamed on Zoom – the link is here: https://fb.me/e/3d9qGnweE
(you don’t have to be a Facebook user to find the details there)