Two weeks have slithered by in a sly and uncatchable manner. Seldom have I written so hard, eaten so much and slept so badly. The weather blessed us with sunshine for our last week, and I got a couple of gentle hikes in between meals and hours spent slumped over laptop.

The Hoodoos still stand, shrinking daily I guess. They started life with limestone hats but have apparently lost those along the way. And Tunnel Mountain (which has no tunnel) was busy with walkers, including a lot of young women with babies strapped to their backs; it must be one of the places that local new mothers go to retrieve their waistlines and catch some stunning views of Banff and the Bow Valley. Fortunately the path (and the trail we take to Banff townsite) has been free of cougars, although we have heard there are three of them in the area who are duking it out for supremacy. A grizzly was also seen not far away a few weeks ago. The meals at the Banff Centre are something to experience, an endless buffet which tries to serve most diets, with dairy and oil-free vegetables and starch, both meat and vegetable-based soups and a pretty good salad bar. At the lunch and supper buffets, the vegetarian offering is often vegan, and for some reason usually does not appeal to me either visually or in taste. Possibly I’m just not a buffet person. Vegetable biryani, vegan lasagne and vegetarian chile have been among recent items. Here, like most places in the western world, it’s possible to eat plenty of meat three times away if that’s where your interests lie.  The buffet also includes about half a dozen desserts for lunch and dinner. Fortunately for my waistline, after much careful sampling, I find I don’t care for most of the sweets though they look quite lovely. 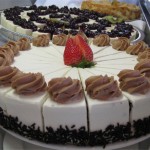 WordFest is on in Banff this weekend and we were privileged to see Douglas Gibson this afternoon, speaking delightfully on his long experience as an editor and publisher. His new memoir, Stories About Storytellers, includes back room tales about 21 of the hundreds of writers he nudged and coaxed into print as an editor and then publisher for Macmillan and McClelland & Stewart. He is finding life interesting “on the other side of the mirror” and finding comfort in his own words of warning to authors. He loves to tell amusing stories but between laughs dropped some grains of hard truth into his tales and generous responses to the Q&A: publishers are shrinking in number (mainly because of being swallowed by larger fish); Mavis Gallant (whose description of Gibson: “I’ll kill him” adorns his book cover) is a brilliant writer and owned the concept of Own the Podium before that was thought of;  e-books are a force to reckon with – they are becoming a big part of every publisher’s repertoire, but if someone tells you how it’s going to be in ten years’ time, seek your advice elsewhere.

After which was a tribute to Robert Kroetsch who was killed in a car accident earlier this year. As he’d been booked to appear at WordFest it seemed only appropriate to honour him  with a display of his books and a few words on his life by Fred Stenson, and a reading of one of his poems by Steven Ross Smith.

This entry was posted in Banff. Bookmark the permalink.