Yogurt of the gods

While living in England I once said, only half in jest, that I would not return to Canada until they started selling Greek yogurt. Circumstances beyond my control made me break my vow, but I still think it was a good one to aim for. There is nothing like Greek yogurt. It is smooth and luscious and may be partly cream; the ewe’s milk version is far milder and creamier than anything made of goat’s milk. Traditionally it was made in porous ceramic pots which allowed the whey to leak out, leaving a thick yogurt, something between other yogurt and cream cheese. Greek varieties made with ewe’s milk contain about 5% milkfat, and cow’s milk yogurts contain 9% (as opposed to whole-milk yogurts in this country which have around 3.5%). You can try to make your own with this recipe. Fage Total Greek yogurt is my gold standard.

There is a legendary restaurant in London called Moro, serving Spanish and North African cuisine, and which has produced a couple of excellent cookbooks, first Moro: The Cookbook and then Casa Moro, which is mostly Spanish food. I have the first one, and in it I found a fabulous recipe for Leek and yogurt soup with dried mint. Lacking the Greek yogurt the recipe calls for, I used Jersey Farms 5% yogurt. Whatever you do, don’t use skim milk yogurt if you’re making this as it won’t have the right silky texture. The egg and flour mixed with the yogurt stabilise it and keep it from curdling, but it will separate if you over-heat it. The caramelised butter (a lot like the black butter in my skate recipe) is important too, as it really adds something to the flavour, which is mild and elusive. Don’t use fresh mint as it would be too.. minty. Here’s a slightly modified version of the Moro recipe (to serve four): 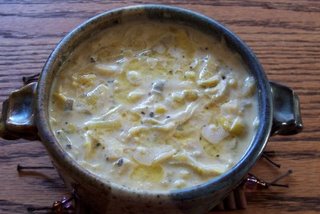 Over medium heat, melt butter in olive oil. Stir in the leeks and cook for 10 minutes. Add the paprika and dried mint and continue cooking gently, stirring occasionally, until the leeks are soft and sweet. Meanwhile, whisk the egg with the flour until a smooth paste is formed. Add the yogurt and thin with the water or stock. Pour over the leeks and heat gently until nearly bubbling. When hot, remove from heat and drizzle with caramelised butter.

5 Responses to Yogurt of the gods