Fruit Trees & More attracts as many visitors as bees, it seems. Bob Duncan 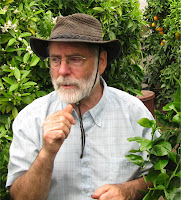 is generous with his time and knowledge in showing countless numbers of fruit aficionados around his demonstration orchard. He’s a retired entomologist who spends his winters scouting for frost-resistant fruit trees that might grow here on Vancouver Island. The Fruit Tree Project had a fund-raising outing there last weekend. We started with some basics on pruning fig trees. 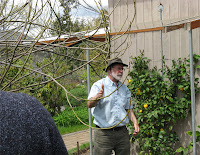 The principle, says Bob, is to cut back the 2 year old branches and leave the thin, year-old ones to hang fruit on. The older branches just keep growing outward, so the tree becomes large and unwieldy. He says the fig is an ideal tree for Victoria as it has no pests or diseases and needs little water or attention; they have two crops a year in hotter climates, so you need a variety that bears a heavy first crop, since the second won’t ripen here. It can be grown in containers as well, but whether in ground or pot needs to be pruned to grow from two or three stout stems.

One of the attention-getting features of Bob’s home is the lemon tree growing under a glass shelter against the south-facing front wall. Acidic citrus fruits like lemons and limes don’t need the heat that sweet ones (oranges, grapefruit) need to set fruit. Though the trees are hardy to -7, their fruit freezes at around -3 so he protects them with Christmas lights on thermostats, and wraps them in Reemay if the weather gets colder than that. 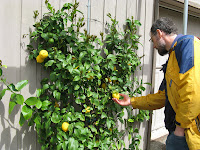 Against the west wall, he has an olive tree 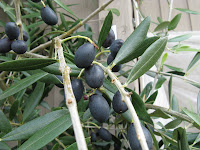 which also grows well here, where we are (so far so good) without the olive fly that plagues Mediterranean growers; the fruit is hardy to -5 and the trees evidently survived even this winter’s -10 temperatures. His apricots 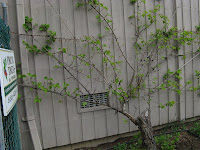 also need shelter as they’re not adapted to wet, humid climates. There was no mistaking the orangerie

where various varieties of oranges 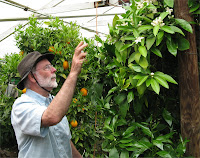 as well as grapefruit 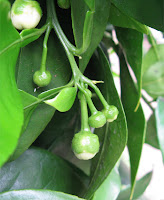 grow year round in an unheated greenhouse, protected like the lemons by Christmas lights on thermostat. 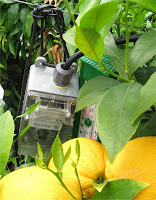 The fruit is left on the tree until it’s needed: unlike many other fruits, it doesn’t drop when ripe but just goes on getting juicier. He doesn’t sell the surplus oranges, unfortunately: you have to buy your own tree – or a jar of his wife Verna’s uniquely local marmalade. His kiwis do produce surplus fruit, however, and he promises the fruits are larger and sturdier than imported varieties. He grows them on this pergola 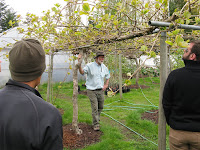 and says if you’re planning to do large scale growing you’ll need the right proportion of male to female plants for pollination. From a kiwi’s point of view, we have a marginal climate, as they need rich, moist soil and sufficient summer heat to ripen the fruit; about one year in six is unsuitable (I’m beginning to suspect this might be one of those..). He says we should watch for orange and red fleshed kiwis, which are about to hit the market.

Apples, those most popular fruits, present in about 200 varieties – many local rarities – and different methods of training and pruning. For most people, this oblique cordon (45 degree angle) which Bob favours 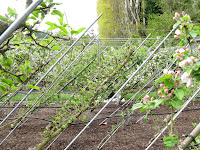 is too complicated to maintain, although it makes for a surprisingly long-producing tree on a dwarf stock, like all his apples. This one gives about 50 apples a year and has been going strong for around 20 years: 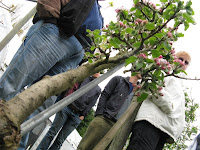 and he says they should live for up to 60 years, which is plenty for most people. He calls this the Christmas Tree style, which is easier to maintain: 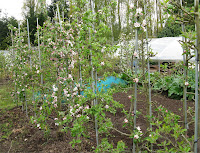 He has to net the cherries to keep the birds off them when they fruit. Here’s a nifty Belgian cordon system he uses (but the “Christmas tree” shape works fine as well): 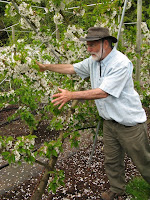 He warns against the temptation to buy multi-variety trees that garden centres are selling (three different kinds of apples etc.) as most amateur gardeners don’t have the ability to manage the differential vigour of such a tree – and you end up wasting money because eventually you otherwise end up with only one viable fruit variety.

Nectarines and peaches can, he said, be grown in the open despite popular ideas to the contrary. It is true they are vulnerable to leaf curl 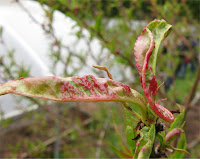 but he counters that with one application of Bordeaux mix, which is a dormant spray approved for organic growing. 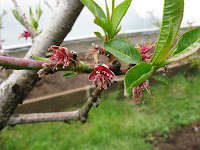 Pineapple guava is an edible evergreen 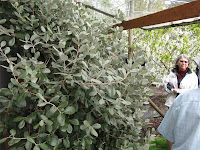 which needs to be grown under shelter, which unfortunately puts it out of the running for hedging.

We looked at his tea plants as well, and the Chinese “jujube” date, and the avocado (which still hasn’t fruited so he won’t sell it yet) and a pomegranate that he’s grafted with several varieties.. and I swear we didn’t see most of the orchard in the two hours we were there. To wrap up, he gave us a fleeting demonstration of his grafting techniques: 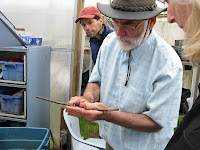 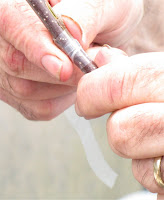 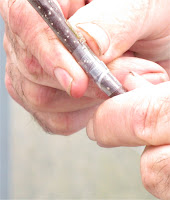 Grafted trees having a rest. 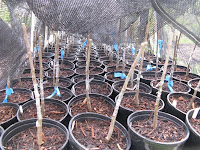 Busy bee houses (this orchard must be bee heaven), showing the hatching chambers on the left, where cocoons are placed after being cleaned over the winter: 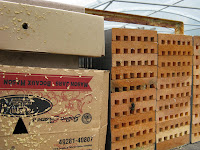