Where has the week gone

Started off the week with a rather dispiriting set of facts from speakers at BCSEA’s monthly meeting, where the subject was peak oil. The first speaker was Ron Smyth (provincial government’s Chief Science Officer, Offshore Oil and Gas Branch and member of ASPO-USA) who ticked through the list of oil-producing countries, showing graphs that tracked the declining production of oil world-wide, and enumerated the percentage of GDP that oil represents for those countries, leaving us to imagine for ourselves the repercussions to national fiscal policies of the increasing loss of significant revenue over the next few years.

The impact, he predicted, would come in the next 5-10 years. It seems likely that instead of pouring money and research into developing sustainable energy sources, today’s short-sighted humans will keep looking for oil and turn back to carbon-unfriendly coal for the near term.

OPEC was at the heart of his presentation (with reference to Twilight in the Desert); he explained that these countries are madly developing infrastructure to secure their non-oil-rich futures: which – aluminum smelters, copper refineries and the like – require a lot of oil to build and run, and so will divert a lot of what would otherwise have been oil exports into increasing internal use. Leaving the non-OPEC world suddenly and dramatically short of oil. Again. With huge question marks dangling about self-sufficiency and living standards world-wide, given the seeming general lack of preparedness in this oil-happy era.

Consoled myself with some dim sum on Thursday, which I hadn’t eaten for quite a while. I was, in my tedious way, struck again by the perils of restaurant menus to the pure of palate. Where had these shrimp, this pork, that rice come from? Unlikely, at those prices, to have been organic or sustainably raised. Free associating now into visual feasts, note to self: must watch Eat Drink Man Woman again one of these days.

Thursday night I managed to get to the art gallery to catch the Rice is Life show, which closes today, and a talk by the curator, Paula Swart (Curator of Asian Studies at the Vancouver Museum) who showed some slides of pieces in the exhibit and photos of her travels around rice-producing nations, and recommended the book Seductions of Rice for the beauty of its photos and the range of its information and recipes. She talked about some of the religious and cultural aspects of rice: Inari shrines in Japan, Dewi Sri in Bali, Mae Phosop in Thailand. As always where food is concerned, ancient methods – sustainable and back-breaking human labour – are eclipsed by the production possibilities of mechanisation and chemical and biotech research. California’s rice growers sow their seed by plane, which is faster but costs more – unless you have a plane and an endless supply of oil, I guess. If all you have is hungry people and lots of land, traditional methods work too. And as always you get what you pay for: cheap rice carries that inevitable deferred price tag of chemical contamination of the product, the soil and the water supply; poorly-paid labour; and declining nutritional value. 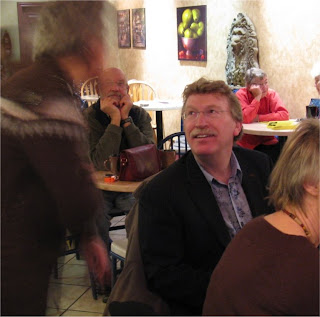 reading in Sidney; his co-star was not Rachel Wyatt as originally billed, but Jo-Ann Dionne who read from Little Emperors, her memoir about teaching English in China. Fred was reading from his latest, The Great Karoo, about Canadian soldiers in the Boer War.

And last night I had friends to dinner, for which I made a welcome journey out the Saanich Peninsula visiting my favourite farm shops — and saw this handsome display at Farmer Dan’s: 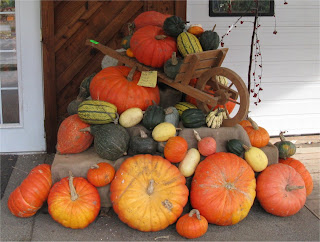 and served a seasonal and mostly local meal, finishing with this dessert which I’d been wanting to try for some time: pumpkin kheer, for which I used a combination of butternut and sweet mama squashes, seasoned with cardamom and topped with toasted cashews. 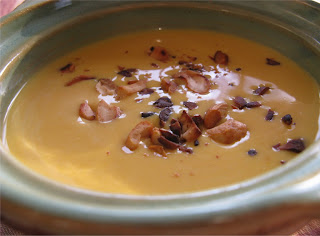 It was good; basically a cold, sweet soup to finish on, surprisingly filling.

Here’s a photo of an afternoon view across the parking lot of my favourite Victoria store: Capital Iron, long may it continue. 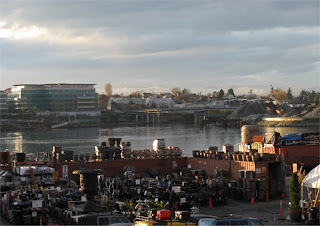