What a week: oil, food culture, slaughterhouses, sensory analysis – and a party

Lost some time last week to the flu, but it was a well parenthesised week nonetheless. We returned to classes on Monday with a lecture on olive oil history by our very own Allen J Grieco. It was an interesting and illuminating trip and unpacked a few things that hadn’t sat side by side in front of us before: the triumvirate of wine, bread and oil, for example, which travel together through Italian history with an importance not just as food for the body, but as tools of the church as well. Note to self: to ensure perpetuity of product, make sure it’s adopted as a religious symbol (in your local dominant religion). We’re looking forward to more about oil this month; later today we have our first oil tasting which sounds exciting.

Last Thursday afternoon, I had managed to crawl out of the covers and enjoy the presentations of my classmates in Laura Mason’s final afternoon on food culture. We heard about pie, curry, marmalade, tea, cake, pudding and more; some of the groups had brought samples, but in my weakened state I thought rice pudding was about as much as I should attempt.

Friday was my first full day of classes, and we had a talk on animal welfare and slaughterhouses in the morning followed by an introduction to sensory analysis in the afternoon. We sat in what I can best describe as an uncertain silence while a number of translation difficulties in the first lecture were overcome, and took what we could from the slides. The gist of it was that there is masses of EU legislation covering animal welfare but the balance is heavily on the side of he who wields the butcher knife (or indeed the electrical stunning tongs). The animal’s welfare is protected because it is a living creature, but that’s about it for empathy and compassion; the rest of the formula aims to reduce stress and suffering because otherwise the quality of the meat suffers.

We aren’t sure yet if we’ll be visiting the slaughterhouse itself to witness the mechanics of that link in the carnivore’s food chain, but many of us are willing to see it, to understand the whole of the practice and perhaps face the reality of what we eat. The lecturer’s remark that he could not show photos on the slides because there was “too much blood to see things clearly” suggests it’s not an easy show; and he responded to one question about the emotional effect on the people working at the pointy end of things by saying that it’s not a job a sensitive person would take on. He himself was trained in veterinary science and works as an inspector in the slaughterhouse, where his job is to check that the animal’s health before and after death won’t impede its use as meat for human consumption. A far cry from coaxing kittens back to health; but doesn’t every occupation to some extent offer you a series of unlikely choices on which to apply your training? I suppose the doctors who oversee lethal injections are at similar poles of application.

About sensory analysis I will only say this to myself: get thee to a calculator. Our instructor, well known by his students as an… unusual personality, is very much an expert in his field, and I’m looking forward to seeing our tasting booths from the inside. We learned about the particularities of choosing a tasting panel, when a food producer tests, as it continuously does, its products for quality and consumer ratings. Not a simple process of pulling likely looking suspects in off the street. Nosiree, there’s math in them thar hills. We ended our first class with a brief lesson in finding the geometrical mean of a panel’s taste threshold. Yowza.

Luckily the weekend spread before us, and a happy series of gatherings to fill our calendars. I did not make it to the farewell drinking dancing extravaganza in Colorno, but it sounds like a lively and long-lived event. I did gather my strength to attend the ABCD B&W Birthday Bash on Saturday: Amy, Bruno, Clementine and Don had alphabetically conspired to have more or less consecutive birthdays to celebrate, and the theme was a mercifully simple one: black and white, which most everyone adhered to, including Bruno’s profiteroles, fresh from Harnold’s Gelateria: 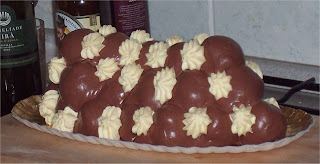 I speak from experience to say that nothing restores the strength of a post-flu victim faster than a profiterole slathered with chocolate and filled with gelato. Still, around 2am, with the dancing in full swing, I decided to be the early-to-bed type and slunk off into the Parma night. Or tried to. Turns out I am still culturally challenged by the inside, outside and all around the townside locks on the buildings here. So, having shut the main entry door behind me and proceeded a few metres to the iron gate to the street, I discovered the exit gate was well and truly locked, and swiftly deduced that the unlocking mechanism must be just inside the now locked entry door.

Choices:
a) climb the iron fence in my skirt and weakened (ok and slightly wine-soaked) state – not a great option, although doable since the gate did not have pointy bits on the top of each bar;
b) walk the perimeter of the building and seek alternate exit point (=none found);
c) buzz for assistance from hostesses of high velocity party upstairs.

I opted for c) and then realised this would entail standing on lower rung of gate to read building buzzer name plate upside down, while not strangulating self between bars (you do not want to ring the wrong bell at this hour, I reasoned). I was never a girl scout but I did have a shiny perfume lid I could hold in front of the names to help a bit. Found the right bell. Rang it. Discovered next problem, which was that due to imminent strangulation I could not actually speak into the speaker bit. Luckily Corrie thought to look out the window and came down and released me and the next guest, who swooshed off into the night on her bicycle.

And she was not the only one on wheels at that time of night. 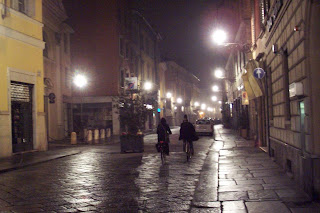