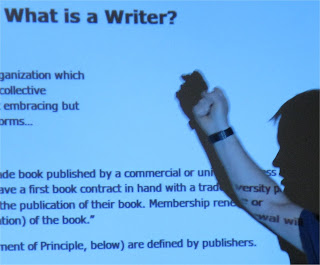 This weekend’s Writers Union of Canada AGM, held jointly with the Writers Guild of Alberta, took place in the comfort of Calgary’s Hotel Arts – quite a step up from days of yore when we used to hunker down in the end-of-term halls of residence in universities across the country. We are, as was often discussed, an older group of writers nowadays, and well up to the delicacies that fell in our paths through the weekend.

whose revelations on the scale of the persecution she and her family, friends and network suffered after she published Irving Layton‘s biography (in the form of around 500 hate letters Layton sent them) sent us running for the wine jellies.

Our appetites were tempered by the discovery that the spoons provided didn’t actually fit into the charming little glasses..

Workshop sessions included an enlightening discussion about new technologies, in which Ross Laird walked us through some of the new electronic demands on our time and energies 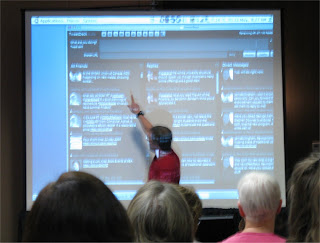 and began addressing the question that has been asked throughout the 20+ years that I’ve been a member of the union: how do we attract the next generation of writers to keep this going? It is obvious, I guess, that our roots are showing: we began as a print-oriented union, obsessing over copyright payments and fairness in book contracts. This year’s debate and discussion about the Google Book Settlement and electronic rights indicates where things are leading. How and how much is the union to change to incorporate the writing life in largely electronic environments; 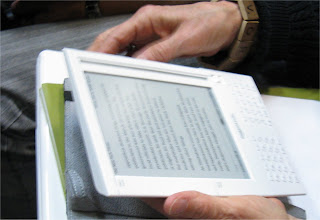 and how to attract a generation that hasn’t yet learned yet to fight together to improve its collective lot in this most individualist age… The questions will be asked for some time to come.

The Saturday night banquet was marred somewhat by the lack of chairs, in a meal designed for schmoozing and grazing, but attended by diners more inclined to sit down with enough room to wield their cutlery. The fare included some darling little pickled golden beets with chevre

beef (this was Alberta after all) 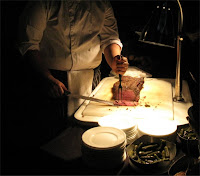 and precious little for vegetarians, who seem to have been designated friends of the deep fryers: risotto balls were not very big or very interesting (neither the saffron aioli which was really just yellow mayo) 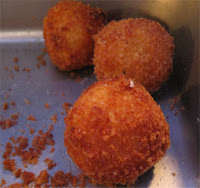 and the vegetable spring rolls, while they lasted, were nothing to write home about. 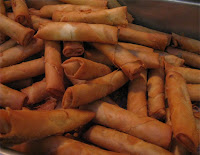 After a few more wine jellies and other small delectables, we hunkered down to listen as Writers Guild of Alberta president Blaine Newton 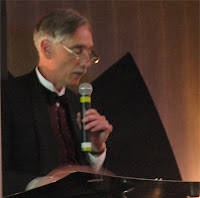 did an admirably witty job of orchestrating the WGA awards and the Danuta Gleed prize for short fiction.

There was a door prize (which I did not win) containing many desirable items, thanks to the generosity of the Calgary Slow Food convivium and its fearless and well-published leader, Dee Hobsbawn-Smith. 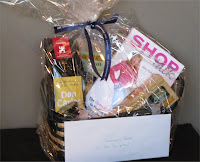 Otherwise, there was much to eat in Calgary. We found a good harvest in The Catch, an unlikely thing, a seafood restaurant on the prairies (the fare flown in daily, so it’s all fresh). Interesting and beautiful food: 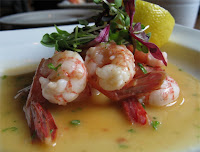 And I enjoyed Hotel Arts’ soups, which are not described as soups on the menu, but rather Chef’s Epiphanies. I had celery & apple soup with blue cheese, and this tomato & fennel soup, both excellent: 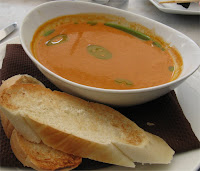