I’ve been to a few meetings of Transition Town Victoria now, including its first birthday party at the end of January 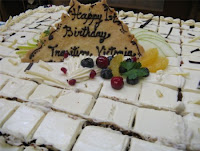 and some momentum seems to be building.

The group, descended from its grandparent in Totnes, addresses the community concerns of those of us who want to start planning now for a life without cheap fossil fuel, which eventuality will change every aspect of our lives, but which politicians and vested corporate interests are apparently trying their best to pretend ain’t going to happen. Which, when it does, could leave us as a species unprepared to face the many inherent challenges of life in a time of energy descent. So small groups of people in many countries are starting to build communities of interest to teach themselves what they will need to know, without waiting for the great lumbering beast of politics to change direction and actually make plans on our behalf.

I’ve been interested in many of the group’s committees, including – no-brainer – the Food group. Most recently I attended a gathering on Reskilling – which aims to identify the skills needed to live in a post-carbon world. Last night we met in the Solstice Cafe 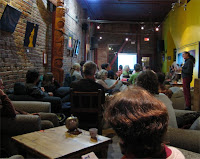 to talk about where to go next.

The possibilities are endless, which makes beginnings elusive; so at our next meeting we’ll define a project we can work on together, which will teach us necessary skills while doing something tangible and useful.