The weekend in review

It was a busy old weekend. Our class pretty much split into two: half of us spent the weekend in Pollenzo, checking out the other campus of our uni and attending a meeting of the Slow Food offices, while the other half larked about at Carnivale in Venice. I couldn’t tell you who had more fun!?

The group I joined got a grand tour of our big brother campus. Our campus at Colorno is the small and newer half of the university which began in Piedmont, in the village of Pollenzo, about ten minutes from Bra where the headquarters for Slow Food has its offices. Amazing things have been done to transform Pollenzo’s campus – the Agenzia di Pollenzo, a neo–gothic estate built in 1833 as a model farm by King Carlo Alberto of Savoy – into a sparkly new facility that can hold up to 180 students enrolled in cohorts of 60 in a three-year program that takes them on field trips literally around the world: they’ve had stages in the UK, Japan, Australia, India and Africa. Pollenzo’s much smaller (pop. 800) than Colorno (8,000); and Bra (pop. 28,000) where most of the students live is much smaller than Parma (pop. 177,000) where most of us do. 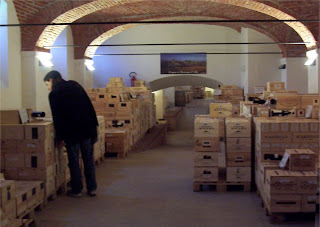 One of the interesting features of the Pollenzo campus is the Wine Bank, in the historic wine cellars of the Agenzia di Pollenzo, where producers can lodge their products in a centre for oenological teaching and present – for study or tasting (but not, alas, by us this time) – a selection of specially selected Italian wines of many vintages.

Back in the meeting room, I enjoyed the business discussions, and the mealtime schmoozing that went on with the 50-odd Slow Foodies from Italy, Germany, France, Switzerland, the US, the UK, Australia, Ireland, Argentina, Canada and the Netherlands. We enjoyed good and interesting foods at lunchtimes: cured meats, varied cheeses, salads; there were of course some Presidia and local food products… including wonderful gelato.

Meanwhile, news from home today made me sad: I hear that Fanny Bay Oysters – locally owned for 22 years, described as the largest oyster farm on Vancouver Island, and one of the largest shellfish producers on the B.C. Coast, has just been sold to a U.S. (Washington state) company. Of course the public promise is that all will remain as it was as far as the running of the company goes, but there was also an uneasy paragraph in the news story I read that mentioned the U.S. firm’s interest had stemmed in part from its lack of a processing plant in B.C. Which suggests that change is inevitable, and that the change will involve some kind of increased processing activity. Anyway, it’s always a sad thing to see business ownership leave the neighbourhood, particularly one where there isn’t a lot of steady employment. However you cut it, it’s local cash leaving the local area, and in this case the country.