The week that ended with cheese and sunshine

Another quite pleasant partially sunny day today, after a week of same. 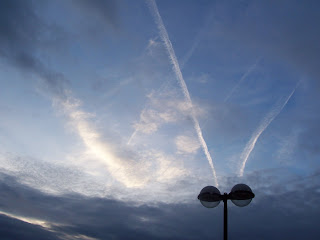 I began the week with a quintessential London moment. Walked down a street called, promisingly, Post Office Way, hoping to find a post office at the end of it, but no. The kindly woman in the Post Office logo-ed glass booth said no foot traffic was allowed there; I would have to walk all the way back and around the front of the building. Which I did and encountered a second kindly woman in a second glass booth who told me I couldn’t actually mail anything there, I would need a Post Office Counter, and she thought there was one a couple of bus stops up the road. But it was getting late by then so I gave up for one day. It’s already clear that ever more post office branches are being closed just now anyway, in my hour of need, when the queues at many of them go out the door regularly, so it’s only going to get worse. There, my first London whinge of the season.

An Italian-style crop of signs on a nearby gate. 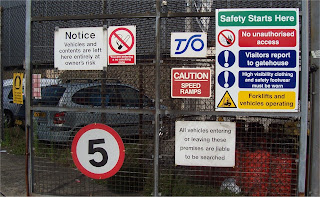 I’ve been enjoying the office, where we have good citizen mugs to read while we sip our tea

and an excellent bakery around the corner (where I bought a fabulous pumpkin loaf the other day – a cheery orange colour with pumpkin seeds throughout).

I take the tube to get there; I’m glad I don’t have a bicycle. There is amusing evidence all over London demonstrating how this city just doesn’t get the concept of bike lanes.. Naturally cyclists ignore this little strip of insanity and ride in the bus lanes, hoping for the best. 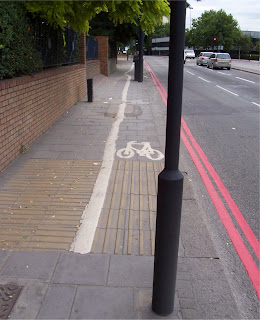 Today’s outings included a jaunt up to St John’s Wood High Street where I visited its three or four charity shops and came away a couple of books heavier: a couple of Bill Bryson hardcovers I couldn’t pass up: I’m A Stranger Here Myself; and A Short History of Nearly Everything. And then I met Judi and we descended into the crowded cheerful basement of Food For Thought, where I had one of my favourite things, a big plate of their quiche and mixed salad. 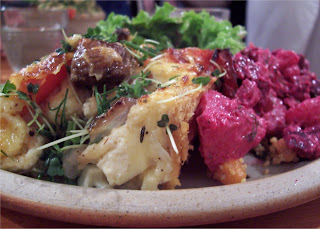 I never have room for their fruit crumbles but that’s just as well. We went on to Neal’s Yard Dairy and tasted several of the wonderful things we were offered. 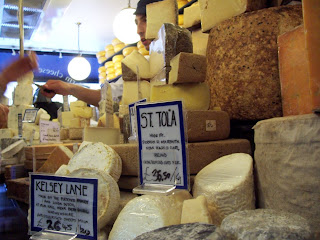 I bought some Coolea and some Berkswell and then we had tea around the corner in Neal’s Yard, 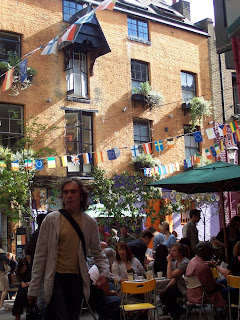 where a couple of tuneful buskers passed through with accordions. And then we had a flying visit at the Photographer’s Gallery where the excellent Keith Arnatt was having a show, and got kicked out as it was closing time, and had a glass at the Coach and Horses and called it a day, as she was nursing the beginnings of a cold and I was finishing mine off. 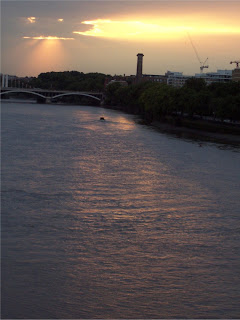