Again the sciopero raises its ugly head. We had been scheduled to visit a cheesemaking factory and then a dairy farm on Wednesday and Thursday, but the bus strike would have affected our, um, bus, so the visit and our classes were rescheduled so we could go Thursday and Friday instead. Then the Wednesday strike was cancelled. Then we heard an all-out strike (buses, trains, planes) was planned for Friday instead. Then that was cancelled. Or was it? All so confusing.

Anyway we were, on Thursday, very happy to visit a Parmigiano-Reggiano cheese factory in nearby Baganzolino on Thursday and see all that had been described to us actually happen before our eyes. We arrived at 8am in time to see the whole range of the day’s cheese production. and were well briefed on the bus.

The milk that arrives at the factory must be delivered within two hours of milking, so there was no time to lose. Everybody went wild with cameras and I think several thousand images were taken as we watched it all unfold; here are a few of mine. 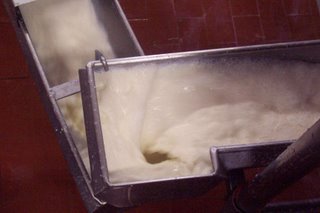 The milk from the evening milking is set out in trays to separate overnight. The cream is skimmed off and this milk is mixed with that of the morning milking, so it’s genuinely partly skimmed. It’s then heated, and whey (naturally fermented from the previous milking) and rennet are added. 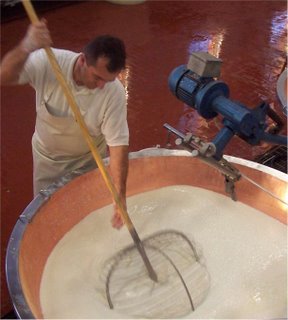 The whey and rennet have been added to the milk; it has coagulated and the curds are being broken up into grains the size of wheat kernels. For this task they use the spino, a whisk unique to Parmigiano-Reggiano cheese-making, named for the thorn branches that were originally used (hawthorne, according to our Italian teacher). 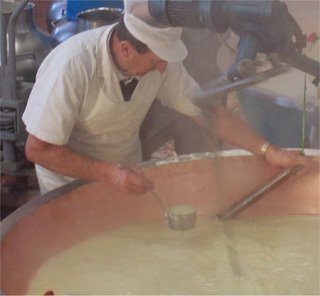 The master cheesemaker – we were told that, like the cows, he never gets a day off – checks the temperature and curd. Once he deems it cooked, the heat is switched off. Traditionally and practically, copper urns are used because of their excellent conductivity: and their ability to both heat up and cool down quickly. 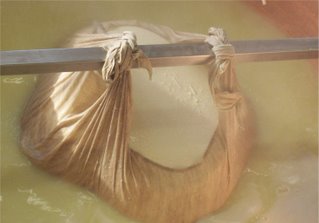 The cheese has coagulated into a nice big ball. It’s cut in half after this; each vat makes two cheeses, a total – for this factory – of 24 cheeses a day. 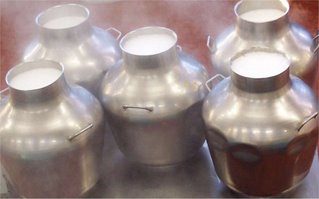 Most of the whey goes to the pigs (this be prosciutto country after all); some is made into ricotta; this batch will be used for the next day’s cheesemaking. 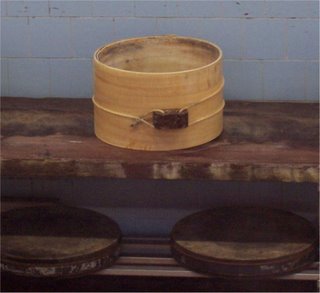 The first mould for the cheese.

After two days – the Parmigiano-Reggiano brand having been imprinted the first day and the cheese shaped in metal moulds the next – the cheeses are floated in brine for 20-odd days, to firm up the rinds and allow osmosis to do the work of removing excess moisture and prepare the texture for a good long aging process. The cheeses are turned and re-salted regularly. Salt is the only preservative allowed in Parmigiano-Reggiano. 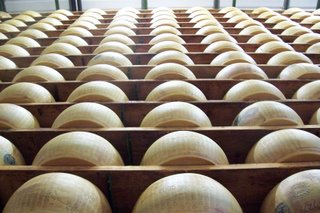 Look up… look wheeeeeyy up! 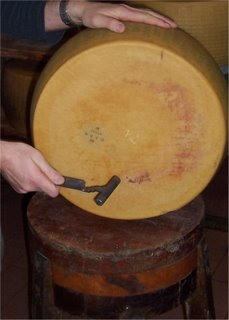 Once aged, the cheeses are tested by experts (battitore) who use a hammer to determine the depth of the rind and the quality of the cheese through sound alone. A hollow note can indicate uneven texture or holes (eyes). We’ve heard from several directions that holes are an impermissible defect in Parmigiano-Reggiano; formed by fermentation within the cheese paste, they can allow bacterial growth and spoil the flavour. The farmers go to great lengths to prevent the cows from eating wet grass, and neither are they permitted to eat silage, because these can promote lactic fermentation that could spoil the cheese during aging; so notes on permissible feed for the cows have been included in the regulations that govern Parmigiano-Reggiano production. 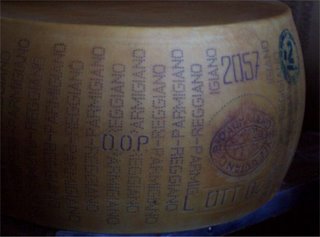 Much of the cheese is sold after 12 months, just to pay the bills. We were told that currently the Parmigiano-Reggiano consortium cheesemakers are operating at a loss, and the earliest they can sell their product is 12 months, at which point it is fine for grating, though the preferred age for eating it as a table cheese is after 24 months. Its digestibility and flavour improve, but its texture gets drier as it ages. One of the distinguishing features of the well-aged Parmigiano-Reggiano is the presence of small white crystals – an amino acid called tyrosine – which you find also in other long-aged hard cheeses such as (yum) gouda.

British cookery writer Delia Smith visited this region and learned about Parmigiano-Reggiano and documented her take on it on her website. I especially liked what she revealed about its noble history in England:

During the Great Fire of London, that most discerning of diners, Samuel Pepys, thought the cheese so precious that he dug a hole to bury his Parmigiano Reggiano to preserve it from the flames.

One Response to The real thing – Parmigiano-Reggiano