… or as they quipped during the Saturday night entertainment, that’s terroir as opposed to terre noire as opposed to terreur. It’s a term that began in the realm of winemaking, to describe the many elements that go into building a wine’s character: the mineral content of the soil, sun exposure, moisture and drainage, altitude and so forth. 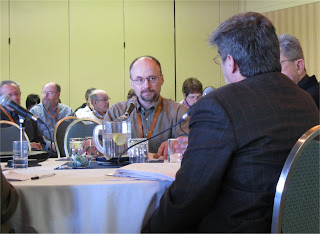 The word has been picked up by other food producers who find it a good all-encompassing way to describe the qualities that go into making a food product unique. If it’s an animal product, you look at the breed as well as the climate, topography and flora that affect the flavour, fat and texture of its meat or milk, which will in turn provide unique characteristics to its products – cheese, for example – made from it.

So last weekend I spent a day at a conference with the enticing title of Terroir, Identity and Seduction which gave the francophones of Saskatchewan (and a few of us anglophones) a chance to take a close look at local issues of terroir, through presentations, networking and even a bit of eating and drinking.

There was a small but diverse and surprising selection of producers offering tastes and consumables of all shapes and sizes; howdja like them apples, from Petrofka Bridge Orchard 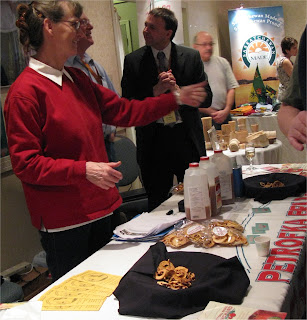 or that lovely flour from Marc Loiselle’s Red Fife Wheat 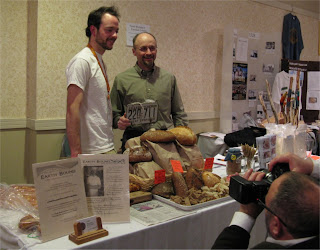 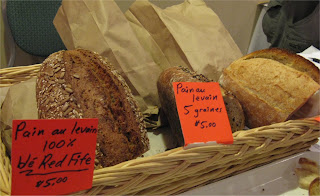 and who could have imagined Bedard Creek Acres’ Red Clover Syrup 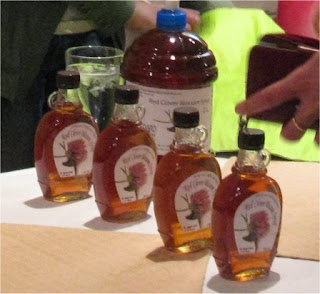 plus beaucoup de bison (including an awesome bison pâté) from the Meridian Bison Company; marvellous moutarde de Gravelbourg from Gravelbourg Mustard (the one with cranberry made me swoon, and yearn for a nice bit of roast goose to eat it with).

André Simard told us about Charlevoix’s Local Development Centre and the state of gastrotourism and food production in Charlevoix, where they’ve made good progress in establishing unique products and viable markets for them, including La Route des Saveurs de Charlevoix, which was set up nearly 15 years ago and continues as a model of gastrotourism to the rest of the country. Jean-Pierre Lemasson offered some gritty truths about terroir, identity and commerce, touching on some interesting dilemmas, like: is it possible to recreate a historical dish when the ingredients no longer resemble their origins? And talked about the industrialization and globalization of production and taste since World War 2, and the sticky issues those things raise for contemporary notions of authenticity and terroir. At lunchtime he offered an impromptu historical view of Tourtière, maintaining – to enthusiastic acclaim – that it is an ancient food, on the grounds that a recipe for a meat pie encompassed in pastry was found on cuneiform tablets, proving it’s been on the table for around 4,000 years. Hotly debated, tourtière’s origins according to folklore are that it was named for passenger pigeons – tourtes – that were used as ingredients a couple of centuries ago; but others maintain that, like paella, the food is named after the dish it’s cooked in. Here’s a recipe for it from Charlevoix. 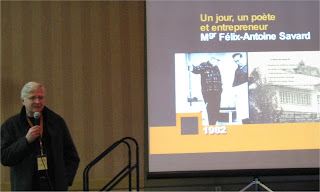 which are part museum, part workshop, part commercial enterprise, or as they define themselves:

a craft or agri-foods business whose products are the fruit of an authentic technique or know-how. The business showcases artisans and craft trades by offering an area for interpreting its production and by opening its doors to the public. 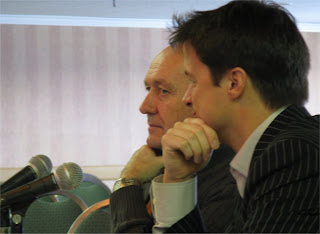 We even had a participant who knocked a few socks off – even when they were sat the other side of the wall in the next room – by ending his presentation a capella. Here he is singing for CBC/Radio-Canada, the one and only Zachary Richard, Acadian advocate from Louisiana: 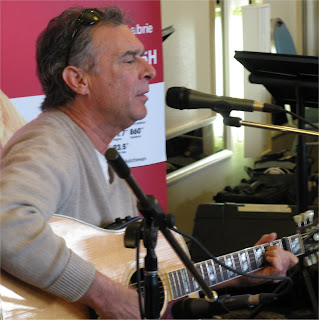 For me the grand finale was the Iron Chef competition, featuring three talented locals preparing hors d’oeuvres we could vote on: 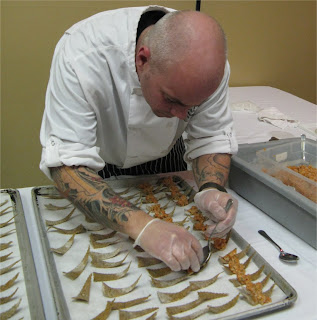 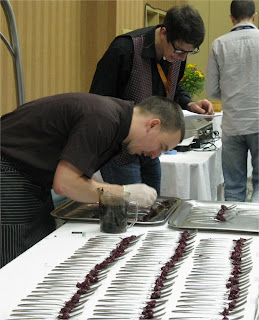 and Trent Loewen prep it up. 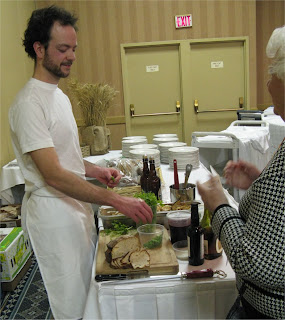 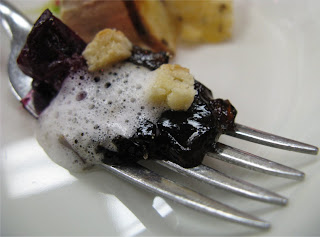 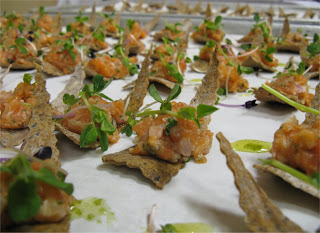 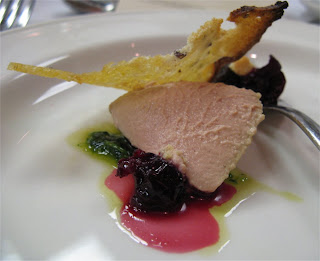