Now that I’m harvesting just about a meal’s worth of greens every day, at least those I can wrest from the appetites of the resident slugs, I am starting to think about what to do with them. It’s mostly rocket/arugula/rucola, a bit of kale, and a bit of spinach. (This picture includes purple sprouting broccoli which is done now.) 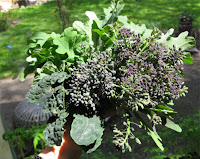 Spinach is a funny one. It used to be the champion green, loaded with iron… until we discovered (back in 1937) that someone had misplaced a decimal point and it’s not the Popeye dream after all. Now I learn that its oxalic acid content makes it hard to digest what iron it does contain; and tea and coffee can also make it harder to absorb. Apparently drinking a Vitamin C-rich drink with your meal will help your body along.

I am always entertained by other people’s scientific experiments with food, so I enjoyed this quest for the perfect pork crackling.

And as seafood generally becomes more problematic, I am particularly leery around tuna. The popular wisdom is eternally contradictory. For example, I hear that bluefin is out, but troll-caught albacore is ok due to sustainable fishing methods (so says the ‘impartial’ advice from a website called PR web, and a number of albacore fishery websites). Then I read this article which explains that sushi grade albacore is the worst for mercury levels. I think I will have to go on mostly avoiding it.