Spring at Haliburton Farm; and the approach of the Enviropig

Out at Haliburton Farm, the seedlings are growing, some of them destined for the Seedy Saturdays that have begun on Vancouver Island. 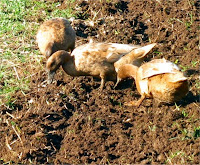 and the last of Farmer Ray’s giant beets are going to feed happy animals somewhere in the area. 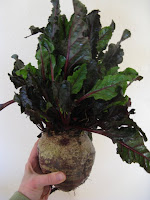 And once again Margaret Atwood‘s prescient novel Oryx & Crake comes to life. We won’t be eating pigoons just yet, but Enviropigs are on the Canadian horizon. It seems that genetic engineers are attempting to address the complaints of people living near factory farms by reducing the pesky smells of too many pigs being reared inhumanely. The obvious solution (reduce pig numbers) is no fun, so the industrialists prefer to splice mice genes into the pigs. Kind of misses the point… it won’t give the pigs better diets or living conditions, and it certainly won’t make those sewage lagoons disappear. All we end up with is the thin end of a wedge that will give us food animals created by lab rats: same issues as GE foods… do we have the faintest idea what other changes might have been triggered by this genetic manipulation, and what might that do to the bodies who consume them, today, tomorrow or next generation?