Double-barrelled week for me, this. I missed last week’s class on sonnets and am plunging in to the one on oulipo. Thought I’d catch up on last week by reading the always readable Don Paterson‘s introduction to his anthology, 101 Sonnets. He did not disappoint:

“Academics, in particular, have talked an awful lot of rubbish on the subject of rhyme; they often make the crucial error of failing to understand that the poem ends up on the page as a result of a messy and unique process, not a single operation.”

“Rhyme always unifies sense, and can make sense out of nonsense; it can trick a logic from the shadows where one would not have otherwise existed.”

And the anthology is a little treasure, not least because of Paterson’s brief notes on each piece tucked away at the back of the book. So helpful to have had someone else do the brow-clutching and rhyme analysis for us.

I also enjoyed reading the American queen of formalism, Marilyn Hacker, who wrote the chapter on sonnets in An Exaltation of Forms. She notes that the North American rant against form often uses the sonnet as its kicking post, and that this scale of objection is absent from British and Irish debate “perhaps because the sonnet, if an ‘interloper’ from the Romance languages, nonetheless has five hundred years of history in their literature…” And nonetheless herself finds early and perhaps unexpected examples in American literature: Ezra Pound, H.D. and Gwendolyn Brooks.

What both poets say is that sonnets have had a bad rap, to be tagged as difficult and constricting. But poets, it seems – if the Oulipians are anything to go by – not only thrive on difficulty but invent it if it appears to be lacking in their lives:

Raymond Queneau, Oulipo’s co-founder: Oulipians are “Rats who build the labyrinth from which they will try to escape.”

As for eats, this week has been a wash since return from foodsville, TX. Not least because there’s been no time to get to the grocery store and I’ve been surviving on things I stashed in the freezer before I left, and a few limp vegetables that survived my absence. I did attempt cajun blackened ribs last night, but although they were acceptably spicy, I’d call them undistinguished. I think I prefer tomato-based rib recipes. The spice mix will be employed in further experimentation once the weather warms enough to bring out the barbecue. 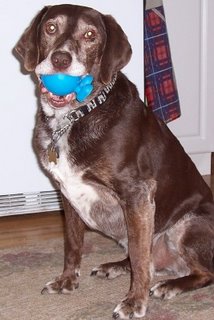 Anyway, Anton the awesome is returning for indefinite stay tomorrow. Maybe I’ll make him some Flea Fighting Biscuits to welcome him home? These rely heavily on garlic and brewer’s yeast to work their magic. Gives dog breath a whole new dimension…