Got to my first meeting of the Slow Island gang – in fact our Slow Food convivium‘s AGM, held at Sea Cider Farm, where we sipped and sampled our way through the evening, gazing out across the young apple trees to little James Island, where a couple of the young members are starting an organic farm. Quite a task, given they can’t live on the island, and everything they need has to be ferried across (but all in all a much better idea than the island’s last role as a TNT factory).

Sinclair Philip, Mara Jernigan and Nick Versteeg raised all kinds of issues, from Terra Madre to the destruction of Garry Oak meadows by Vancouver Island developers.

One thing Nick raised was the trade sanction wickedness Canada is doing now, which is being under-reported in the press. I suggest to all of us in this country that we drop a line to our MPs and register our dissatisfaction with the idea of Canada using trade sanctions to try to force genetically modified products on Europe, which surely has the sovereignty to decide what it allows into the farms and kitchens of its member states.

Basically, since 2003, GM-producing countries, including the US, Canada and Argentina, have been lobbying the WTO to force Europe to allow GMO imports. And in 2006, the WTO agreed that the EU had to allow GMO imports whether they wanted them or not. Unfortunately, Europe is not one country, and its 27 member states are not generally in favour of allowing GM products (– and really, is the power of collective dissent against economic pressure from others not one of the very points of trade organisations?). The US is holding its economic cudgel off until June of this year, but Canada’s deadline to have the EU comply with the WTO was February 11.

Speaking of dates, as I’m sure all the church-goers know, we’ll have to get our greens on early this year, as St Patrick’s Day has been moved to 15 March, by order of the Vatican, because this year’s early Easter causes 17 March to fall in Holy Week. Apparently no liturgical feast may take place during Holy Week, so St Patrick had to move aside.

Last night, St Patrick’s Eve, as it were, was also the reading at Planet Earth Poetry by visiting Saskatchewanian Glen Sorestad, who gave us a delightful display of his wares, 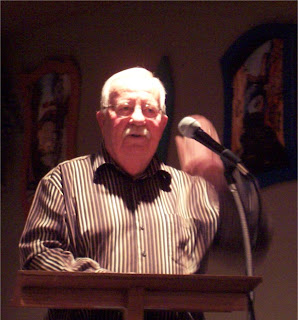 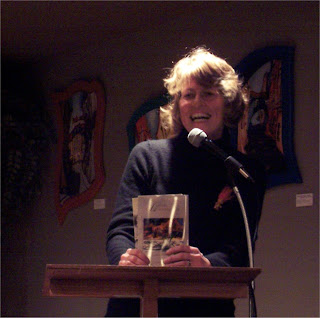 And then there were signings 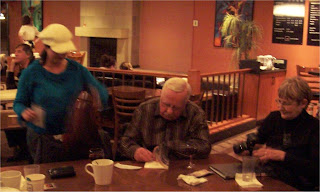 and off we all disappeared into the night.

One Response to Slow cider and fast poetry