Slightly cooler and ever so much nicer in Parma

It’s a mercifully cooler day here in Parma, and I’m sitting with my windows boldly open at 11.30 in the morning, fans off, enjoying a breeze. I can honestly say that’s a sentence I haven’t been able to write for months, and I’m grateful to be able to do it now.

Last night we had another farewell gathering: they get smaller and smaller as people take off for their summers ‘n stages. About half a dozen of us were having a glass of wine together around 9pm when our chairs began to shake gently. We’d been talking about fast food, and although at first we suspected it was the Wrath of Carlini, we swiftly arrived at the conclusion we’d just experienced a mild earthquake (measuring 4.6, as it happens).

Oddly enough, I had been reading only on Sunday in my guidebook which told me that Parma’s duomo was

“erected on the present site by heretic bishop Cadalus, who later became antipope Honorius II, but was destroyed by the violent earthquake of 1117 that shook the whole Po valley and left only parts of the apses standing.”

We finished our glasses and headed into a breezy, almost chilly, evening and washed up at Sorelle Picchi, where I’d had my lunch, and this time ordered a big bowl of cappelletti in brodo, which were absolutely delicious. 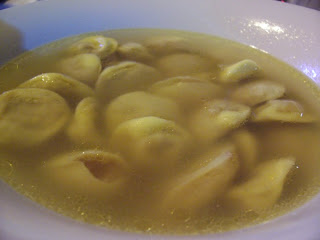 While we were waiting for our food, we saw a man who’d stopped us on the street to ask if we’d felt the earthquake. He was in his seventies, I’d guess, and had his white table napkin draped around his neck: he and his wife, who hovered in the background, had been eating supper in their fourth floor apartment when they felt the vibrations and fled into the street, thinking Parma must be at the epicentre of some awful disaster, and were too afraid to go back inside. He paced up and down stopping everyone – passers-by, tourists, policemen – looking for some kind of reassurance. he disappeared eventually, but I saw him out on the street again this morning, still anxious but lacking his napkin.

Meanwhile I was spending some time today looking at YouTube videos and happened upon one for Unisg. It starts off well but then gets a little draggy with fuzzy tourist shots of Delhi and chops off suddenly at the end. But it was a delightful surprise: