I visited Moss Street Market for its end of season finale, which happened to be on October 31, so there were some oddities around. Flash in the Pan was providing the music; sounded better than they looked!

Poor farmer had to wear a potato sack… 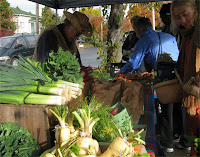 Some flies buzzing round the Haliburton stand 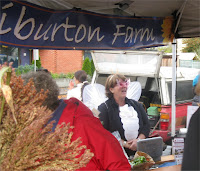 The last thing I thought I needed was more apples, but this selection 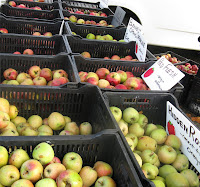 was too interesting, and I weakened upon tasting the surprising Grenadine, the perfect Halloween apple?

Other items of interest to cross my path of late include the Spanish Nun video, in which Benedictine nun Teresa Forcades i Vila discusses the H1N1 business in terms that don’t make one particularly eager to rush out and get the vaccine. (Assuming one could even do that!)

She makes mention of a largely unreported incident last February when Baxter released a flu vaccine to Austria, Czech Republic, Slovenia and Germany that was contaminated with live avian flu virus, offering the potential to spread a lethal virus very widely; Baxter is one of the companies now making the H1N1 vaccine.

And she has a number of concerns about unique aspects of this vaccine: the lack of legal redress for any people suffering side effects that has been built in by pharmaceuticals and governments; the different way it works from regular flu vaccines; and the effects of making H1N1 vaccination mandatory rather than voluntary.

She also explains that the WHO’s removal of the term “mortalities” from its definition of “pandemic” is why we are chasing our tails now over an infectious but not overly lethal flu instead of saving our international efforts for a pandemic that actually endangers the lives of high numbers of people.

It’s kind of long (about an hour) but worth watching just to hear some things you might not get elsewhere.

BELL TOLLING for the Swine Flu (CAMPANAS por la gripe A) subtitled from ALISH on Vimeo.

It is perhaps worth pointing out that Sr. Teresa is the author of Crimes & Abuses of the Pharmaceutical Industry, which I’d say is a booklet worth looking at, as it addresses issues to do with abuses of power by pharmaceutical companies on the lives of impoverished and vulnerable people.

One Response to Scary times