An arugula flower; if I were a bee I think I’d find this pretty irresistable… 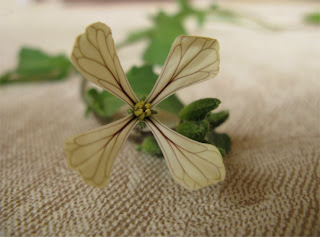 I was thinking about the zinc ointment my mother used to apply to our childhood contusions, Dr. Chase’s Ointment, it was called, which led me to stumble upon this strange recipe for a toad salve for sprains, which sounds ghastly. Can’t help but wonder how he devised the recipe in the first place. Why toads? Why 4 of them? What did it smell like as it ripened?

For sprains, strains, lame-back rheumatism, caked breasts, caked udders, Etc. Good sized live toads, 4 in number; put into boiling water and cook very soft; then take them out and boil the water down to a 1/2 pt. and add fresh churned, unsalted butter 1 lb. and simmer together; at the last add tincture of arnica 2 ozs. This was obtained from an old Physician, who thought more of it then any other prescription in his possession. Some persons might think it hard on toads, but you could not kill them quicker any other way.

I am greatly entertained by my new soil-blocker, which I used to make cubes for seeding my winter veg. It all looks oddly like brownies at this point. 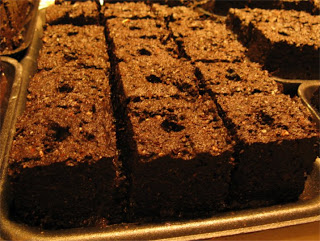 Though I ran out and bought one, soil-blockers take many forms and can be made in various ways, as in these instructions.

On a more edible note, Campbell’s Soup company is stepping into the realm of grow-your-own, by donating seeds to the National FFA Organization (formerly known as the Future Farmers of America) in the US. Visit the Help Grow Your Soup page to click them on their way.

Some nice things on the farm stand at Haliburton this week: