There’s a lot of buzz around the salmon walk (Alexandra Morton’s Get Out Migration) which has involved a land-based migration of activists travelling by foot from Sointula, on Malcom Island, down Vancouver Island, raising awareness about the risks to wild fish of ocean-based fish farms (or, as they are described by some, Norwegian feedlots). It commenced on April 21 and is due to end in Victoria on May 9. Here’s the itinerary if you want to join in or just see what’s happening where.

Some good news around meat inspection regulations in BC; the protests were heard – to some extent – and the regulations have been changed. A little bit. It doesn’t solve the problem for a lot of farms, but it’s a start. When the regulations were changed initially, many small livestock producers on this island had simply packed in their business when the regulations made it impossible for them to carry on; it will be interesting to see how many are willing to get back into this. Meanwhile, I hear that the reduction in livestock has meant a reduction in the amount of manure available to farms and gardens, which is causing problems for farmers wanting to carry on building their soil without artificial fertilizers. (When oh when will we be able to remember that everything is connected?)

Sourdough seems to be everywhere I turn these days. Here’s a great website that explains how to make a reliable starter using wild yeasts (which are present on the grain, not floating in the air as many suppose… which is what Back Home baker Mark Sinclair told us at the sourdough workshop he gave in Victoria). There’s a good article about sourdough in the Wall Street Journal, and another in the Atlantic.

Lovely Lorri Neilsen Glenn read at Planet Earth Poetry‘s season closer on Friday. Before she was allowed to get on stage she had to eat some Cowichan Bay Chicken confit with very local purple sprouting broccoli and organic beets & cumin;

and help pack up Rhona’s Own Baking for the Haliburton farm stand.

We got to the venue to join a packed house

and Yvonne Blomer, seeing out her first season as host 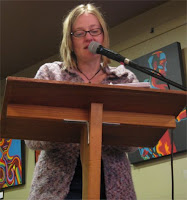 and then, and only then, was Lorri allowed to read to us from her superb new collection, The Lost Gospels.

On Saturday she flew the coop, heading east, and I was forced to seek other entertainments, including the Haliburton Farm garage sale 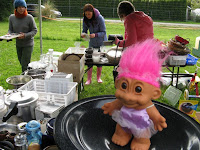 which was meant to raise money for repairs to the farm stand and greenhouse. The day was also the opening of Haliburton’s farm gate sales, featuring vegetables, seeds, herbs, seedlings and even a bit of baking.

0 Responses to Salmon, meat, sourdough, Lorri at PEP and the Hali garage sale