Aldeburgh ended with a lecture and a reading. At the crack of noon-thirty, our English comprehension was sorely tested by Don Paterson‘s speed-readings of a selected few of Robert Frost’s poems (West-Running Brook; Design; and To Earthward). He peppered his talk with a few high-falutin’ bits of terminology (autopoiesis, domain theory, thematic domain, emergence) which seemed to be summable as: Frost’s poems are highly crafted and admirably self-contained with imagery so integrated the poems are unimaginable in any other form. Well, quite: but much better said in a talk which we can only hope will soon appear on Paterson’s website where we can enjoy it at a slower speed.

We sprinted out for some fish and chips 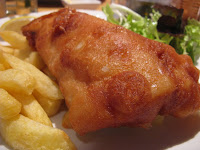 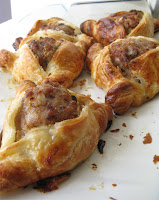 and a sudden drenching by the changeable weather – in time for the final reading. We heard from Lars Gustafsson (Sweden), Marie Howe (USA) and Bill Manhire (New Zealand).

A couple of days’ rest and fasting in London ensued. Yesterday I roused myself and joined a small throng of sustainable foodies

to travel to a different part of Suffolk for an Ethical Eats farm visit to Longwood Farm, run by Matthew and Louise Unwin. We were accompanied by Alison Mood from Compassion in World Farming, who gave a short presentation – somewhat hampered by technological glitches during the showing of this video on the treatment of farm animals.

After the talk, we were fed an enormous lunch featuring chicken and vegetables raised on Longwood Farm. We hoisted ourselves to our feet and with organic farmer and butcher Matthew Unwin

as guide, set off on a tour of the farm, which includes beef,

An organic pig farmer leases land on Longwood Farm as well, operating on a four-year rotation. This encourages soil fertility and the growth of forage crops for the other animals. The pigs are moved onto new ground as they’re weaned, so the process takes about six months each year.

A warm interlude in the chick barn, where week-old fluffballs were basking under a heat lamp and listening (no lie!) to The Archers. Where chicks are reared like these ones, without the medications routinely administered in conventional animal farming, organic farmers expect to lose a small percentage, particularly in the first week or so (he’d lost 14 of the 400 we saw). They are kept indoors and warm until they are about 3-4 weeks old, and given some heat until they are about 6 weeks old, after which they can spend the rest of their lives freely ranging (to meet regulations, two-thirds of their life must be lived free range). They live in sheds on runners, so they can be moved around the property, and at their earliest age can fall victim to a surprising list of predators: seagulls are the worst offenders, but rats and crows can also go after them.

We had a sobering lesson in fowl behaviour and the gruesomely literal imposition of the pecking order when we reached the farthest chicken barn. Most free range chickens like this are happy and peaceful enough, but every few years, says Unwin, there’s a savage lot – probably only one or two troublemakers who manage to rile the whole flock. They start fights that end up with one of their number killed, and then eaten (like pigs, chickens are not vegetarians – which we witness less queasily in their fondness for insects). He has been trying to identify the perpetrator but so far hasn’t found it, and in the meantime regularly finds corpses. These chickens are being reared for the Christmas market so will be slaughtered at 16 weeks when they are good and plump, so the problem won’t go on much longer for this group.

The turkeys were numerous and curious. Organic pasture-raised Kelly Bronze turkeys like these command about £12.50 a kilo. They take 6 months to rear and are then hung for 3 weeks. Their flavour, of course, is excellent as a result, and they are free of the medications that intensively farmed turkeys are administered from day one.

Unwin has a lot to say about the differences between organic and intensive farming. When discussing the price of his turkeys, he drew what I thought was a very apt comparison: while people are willing to pay a premium for quality in cars, acknowledging for example that there are good reasons why a Rolls-Royce or Ferrari should cost so much more than an everyday beater: but when food-shopping by price alone as we’ve been taught to do, consumers don’t recognise the comparable difference worth paying for in food. Which is endlessly ironic in this one consumable that we so literally consume.

(In comparison: intensively-farmed Broad-Breasted White turkeys – bred, as we all surely know now, to be so top-heavy they’re unable to breed naturally – are typically brought to slaughter weight at 4 months. Having legs too weak to support their weight, and being reared in overcrowded conditions, they do not develop a normal muscle structure, so the flesh of the Broad-Breasted White is soft and watery (partly due to processing which means they are soaked in a water bath, and may absorb up to 5% water as a result) and heavily oriented to white meat.)