We spent our last day touring Torino‘s ethnic markets with Vittorio Castellani, journalist, broadcaster and self-declared gastronomad, known locally as Chef Kumalé. An anthropologist by training, he has put his background to good use in communicating the issues, circumstances and foods of Torino’s ethnic communities. He’s a writer as well, and worked with our friends at Lavazzo to write Coffee Roots. He was kind enough to agree to an impromptu book signing at our meeting point, outside the Hamam, which originally served as the bath house to Torino’s immigrant workers. We toured the facility later: abandoned for 20 years, it’s been refurbished and offers meeting spaces, a cool and tempting basement restaurant and a turkish bath open on alternating days to men and women. 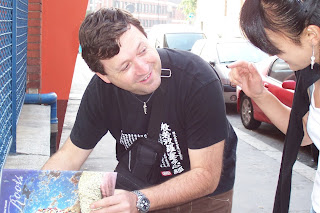 These are the tenements where the workers lived, above the market. Abandoned now, they held workers from the south of Italy and from many immigrant communities; they still host occasional squatters, many these days coming from China. 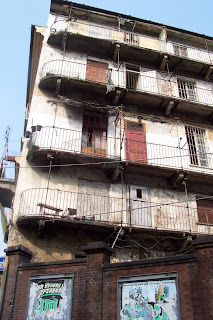 The food market is large and varied and sprawls across many streets and buildings: this is the farmer’s market section, an unusual feature in Italy where the food markets nowadays tend to be straight retail operations selling imported produce. One of Slow Food’s projects is to try to develop a network of farmer’s markets around the country. 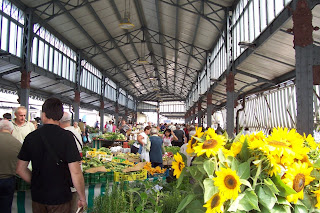 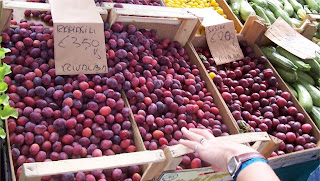 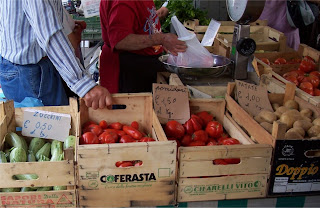 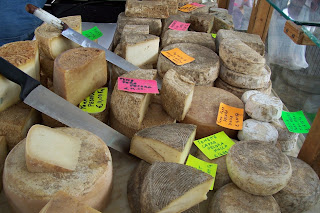 The market changes to reflect the communities it serves. In the enclosed section of the food market, Italian traditional producers now also sell cheeses and salumi tailored to Romanian tastes. There are areas of the market for all the different regions of Italy as well: we passed a little slice of Puglia, way up here in the north. 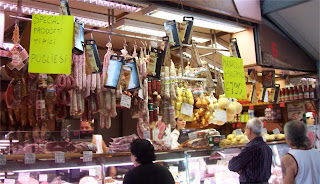 From an Asian-run stand, you can buy a bit of pork tongue or veal nerves. Why not?

We checked out a local Moroccan bakery, serving that community’s needs for pastries and sweets. These are part of its culture; a social currency as well as a food tied to religious observance. When breaking Ramadan fast, sweets and pastries are some of the allowed items. Packed with dates, nuts and honey they are a quick, effective source of energy to bodies depleted by fasting. 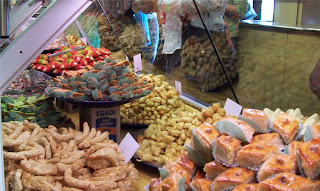 In the courtyard at Torino’s mosque. It’s the simple grey door left of centre in the photo, situated in the courtyard of a tenement well hung with laundry and plastic sheeting. There were 24 of us there, which was comfortable; every Friday afternoon 20,000 moslems head in here for worship, aiming for one of the 200 spaces inside. The ensuing tension and conflict are widely reported, but nobody seems to know what to do about it. 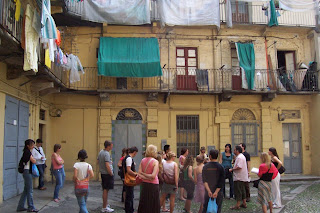 After we parted from Vittorio, we leapt back into the bus and sped off to Eataly for lunch. Built in a former vermouth factory, it’s a large and impressive edifice, one of the new wave of groceries (not unlike Whole Foods?) promising products for all budgets and offering a whole consumer experience. We started our day there with very good bread and lovely pizza (mine had fresh tomatoes, ham, anchovies and burrata – a fresh mozzarella with cream). 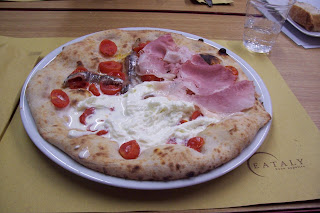 We travelled round the facility with Sebastiano Sardo, Slow Food’s man in Eataly. He shows us a whole lot of beer. Unusual for Italy. 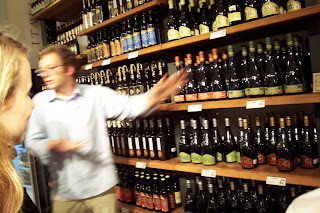 A whole lot of wine. Not so unusual. 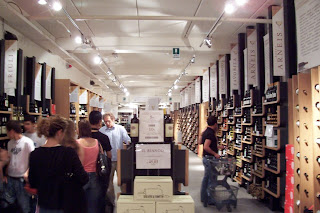 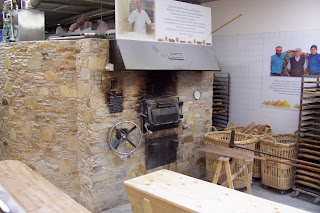 Education is a big part of the picture: the seasonal wheel shows families, as they enter the store, what’s in season here. 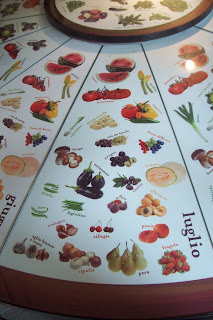 The store has a library where you can browse food guides, surf the internet and even buy books and Slow Food paraphernalia. 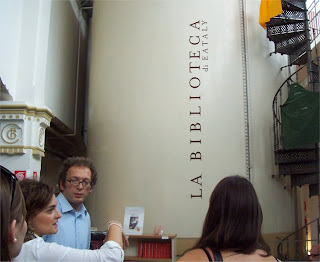 The foods of Piemonte, a special display which gives a bit of history and background to the foods of the area. 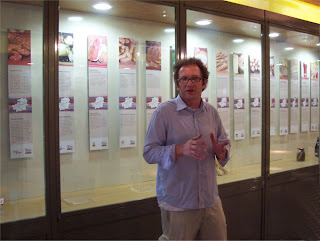 Paying tribute to the building’s origins, there’s a vermouth museum on the top floor, with these cool copper sniffing devices which give you a sense of the relevant aromas. 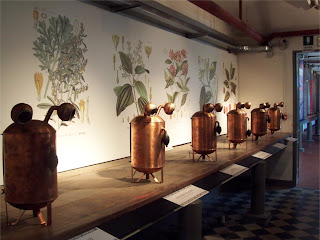