We had four busy days exploring Piemonte (Piedmont), in north-western Italy. We made an early start from Parma and lunched in Pollenzo, at the campus cafeteria of the first and other campus of our university, and were able to exchange notes with a couple of students on the degree course, which lasts three years and has a much higher enrollment (60) than our master’s program. The first group of students in this program is due to graduate this year, after many travels and many experiences. It’s an expensive proposition, but even so the tuition only covers half the expenses: with tours stretching as far afield as India, Australia and Scotland, it can be pricey and complicated to administer.

After lunch we met the first of two winemakers from the region. Michele Chiarlo specialises in two famous Piemonte grapes: nebbiolo and barbera. I had fallen in love with Barbera wine this year so was thrilled to taste a couple of excellent examples, and some excellent Barolo, while hearing about the winery’s operations from oenologist Stefano Chiarlo. The interesting details he explained included setting the corks (only natural ones – like others we’d met, he maintained that artificial materials don’t work in wines that need to age in the bottle more than three years) with the bottles upright; after two weeks, the bottles are all turned by hand into the horizontal position. He feels this keeps the cork in better condition for aging. 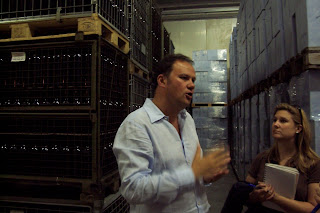 After the tour and the tasting, we had a particular treat when he took us up into the hills to see a barbera vineyard. He told us about the green harvest, which is the pruning, over the summer, of excess grapes, so that the plants can pour their energies into producing more concentrated flavours in the remaining bunches. He also explained that the vineyard had originally been owned by Tuscans, who brought the cypress trees in the background, which are now about 250 years old. 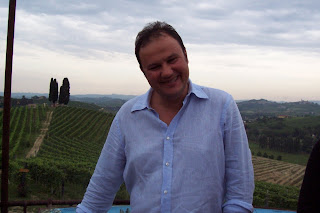 His family are art lovers, and there were some very cool things to see alongside the grapes. 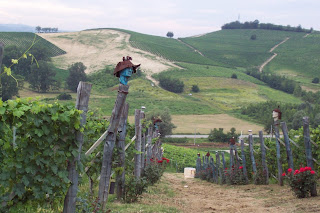 New takes on an old tradition which posted heads on every road, as protection against malady. Note the ubiquitous rose bushes which here too play their important role in predicting fungal attacks. 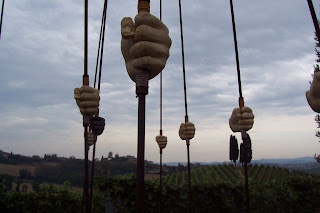 They also host a summer festival in the vineyard, with music and wine.

That evening we were treated to dinner in a special osteria, the Ristorante ‘Belbo Da Bardon’ where we had some excellent meat-filled pasta, some very tender veal with broad beans, and a lovely slab of creme caramel. 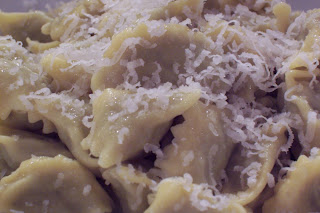 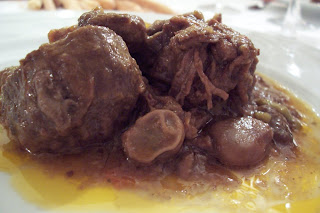 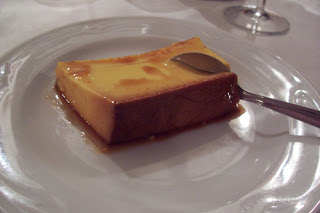