So I’m back in Parma, bracing myself for an earrrrrly train tomorrow. I’m going to Bra, which is not so very far but an absolute pig to get to by train. Four hours or so. Oh well. The destination will, I hope, be worth the pain of getting there: Cheese, glorious cheese.

I got here on Wednesday afternoon: left London where the generally fine weather I’d been grateful for for most of my stay so far had turned cold and grey with spitting rain. I sprinted down the street and got onto the airport bus with about three minutes to spare, made it to lovely Stansted in good time, and then killed it in various queues. The check-in queue was enlivened by a frequent occurrence at Stansted, namely the embarrassed departure of a pair of English holidaymakers who thought they were in the queue for Palma, Majorca. The endlessly unhelpful airport staff of course know all about the confusion – the word Palma is totally indistinguishable from Parma in the English accent over a loudspeaker – but make no concession to the weakness of travellers when making flight announcements. What fun!

My heart sank when I saw the number of Italian teenagers boarding the flight. We used to have to share buses to Colorno with this species on occasion, and in quantity they are among the loudest, most obnoxious and charmless creatures that walk this earth. But other than bolting out of their seats only seconds after a rather bouncy landing (and after a stern voice-of-god reprimand they hastily sat down again) they were surprisingly, gratifyingly well behaved. 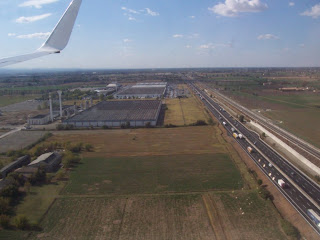 Our welcome gift at the micro-airport was at the luggage carousel. The light started flashing, the beep sounded, and through the rubber curtain emerged… the guy who’d waved us into the passport control. He waved and smiled and then disappeared out the other curtain. I do love the way life can be so weirdly casual here.

All else in Parma is calm and quiet. 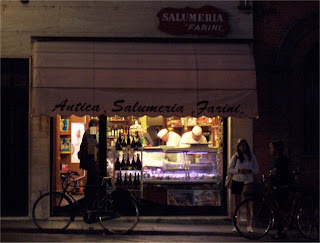 I have made lightning strikes on some of my favourite eateries – so happy everything is open again! Lunched at Sorelle Picchi and supped at La Croce di Malta (gorgeous torte of melanzane followed by a layered thing with potato and anchovy – interesting but a bit of a waste of a perfectly good anchovy I thought) 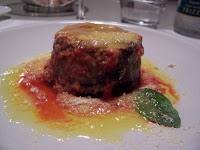 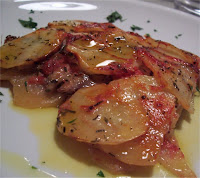 The meals have given me occasion to think about the matter of service in restaurants though. I’m thinking is it better to have friendly but inept service, which is more or less the case if you are recognised here, or snotty but correct service. Though usually the snotty service is also bad. So I’m settling for friendly. But it grieves me to see good restaurants losing points with new diners through simple ineptitude.

That having been said, I must praise once again my favourite chef in town, Davide di Dio, whose well deserved holiday seems to have given him some new verve; and I was pleased in the interests of his continued health and sanity to see he had more helpers on board at Ristorante Mosaiko. I hope they can keep up with him. I had a starter of Baccala on a wedge of what looked like a crouton 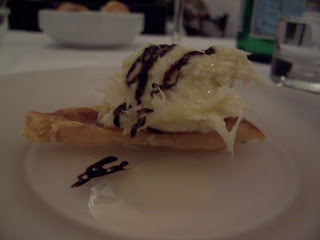 but turned out to be artichoke, drizzled with balsamico, yum: and I can honestly say I now see the point of Baccala. Then on to a primo piatto of prawns wrapped in crunchy blankets – Involtino di Gamberi Croccanti 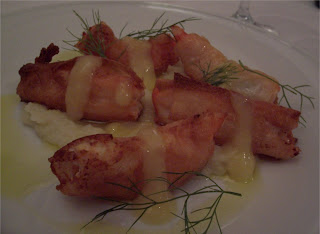 with a puree of fennel and lemon cream. Perfect. And then Rombo in crosto di patate alla zucca: 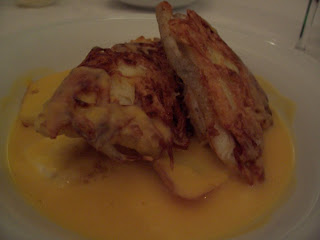 some beautiful turbot, perfectly cooked in a potato crust, docked on a few perfect roast potatoes in a thick orange sea of pumpkin soup. Since it was a night for overindulgence, and as I hadn’t had tiramisu since arriving in Italy, I thought I might as well. Very very nice. I went home well fed and looking forward to my next, and probably final, visit in November.

Tonight will be a quiet night of packing and resting.