Painting with light and tasting with wine

One of this week’s visiting lecturers was Alberto Cocchi, a Parma photographer who works out of his studio in Bologna. His American accent threw us at first – he spent some years in the US studying and working – but he was all Italian when it came to style and attitude to food – his photos were inventive and gorgeous. He revealed that the very etymology of “photography” comes from Greek roots, and means painting with light, before walking us through the technical stuff, the f-stops and the ISO settings, the digital vs film debate.

Depth of field, he said, is where it all begins when you’re talking about food. Or talking, more specifically, about food porn (a term last year’s students had taught him and which, since we’re getting technical here, I feel obliged to reveal was originally gastroporn, discussed in print as long ago as 1984, in The Official Foodie’s Handbook). He showed us some examples of his work with depth of field: selectively using focus to group objects, and using light to create interest and even a bit of mystery. We had a quick preview of his recent shoot in Scotland where he photographed whiskey, oysters and Black Angus (on and off the hoof).

Yesterday we had a photo shoot in the classroom where he worked magic on a couple of dishes, showing us the difference between natural light, side lighting, fill-in techniques (using plastic mirrors or even cosmetic mirrors) and more complicated stuff with softboxes, umbrellas and flashes. We got to watch the photos evolve on the screen. We’re looking forward to seeing him on one of our field trips later this year, when he’ll take us out and let us test what he showed us. 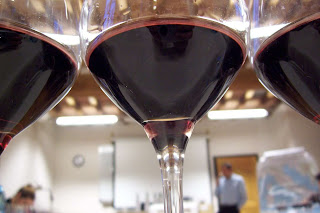 And we had an informal wine tasting. Some Barolo, Brunello di Montalcino, Amarone, Nero D’Avola, Cabernet and Pinot Nero passed beneath our noses and across our palates in quick succession, and then we had to run for the last bus home and – those of us attending – get ready for our Valentine’s Day dinner. It was red and white food, which included radishes & salt, cream cheese with red pepper jelly, pasta, roasted baby red potatoes, rice pudding and strawberries (in chocolate!). Oh, and red and white wine I guess. The Valentine’s cocktail was prosecco with pomegranate seeds, very pretty.