It’s a byproduct, it’s a food, it’s a fertilizer..? Okara is all of these things. It’s made up of the solids left over from tofu and soy milk making, and resembles cottage cheese. It starts to sour and then rot fairly quickly so is perishable if you’re planning to eat it, as many Japanese do. It is rich in iron, low in fat, high in fiber, and also contains protein (not nearly as much as whole soybeans of course) as well as calcium and riboflavin.

Raw okara needs some preparation before using, both because it’s relatively flavourless on its own and because the proteins need cooking to become digestible. It should be steamed or baked or toasted for 25 to 45 minutes, or fried in oil for about 20 minutes until thoroughly cooked, and then cooled before using. It’s very light and crumbly once cooked, and still pretty flavourless. 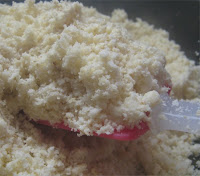 You can add it to baking, use it as a substitute for nuts or ground beef; there are recipes around for okara falafel. I added it to some potato-vegetable pancakes last night, and it was good. There’s a useful-sounding blog out there, Okara Mountain, which has many more ideas.

Here’s a video on home tofu making, (and another one on making your own soya milk at home). The astute will notice that both tofu and soy milk begin the same way, and it is in these early steps that the okara is produced.

Okara is also a great soil enhancer if added to your garden or compost in the spring. If you leave it too long and it starts rotting in the bag, it will, as one of Haliburton‘s farmers put it to me, stink like a dead deer, though when spread over a garden and loosely raked under the leaf mulch, I haven’t noticed a smell. But that decompositional tang, certainly discernable to the canine nose, might explain why old Anton has developed quite a fondness for it, so I have to watch him closely until it rots down. I hope I am not attracting other four-legged browsers in the meantime.

And further to an earlier post which featured a Genetically-Engineered Foods Shoppers’ Guide from The Center for Food Safety, here’s one for Canadians, thanks to our friends at Greenpeace.