It sounds like the start of a bad joke, doesn’t it? When is a poet like a mushroom..? If I had been to more meetings of the South Vancouver Island Mycological Society, I’m sure I’d be able to fill in a punchline. We’ll have to come back to that another time I think.

Last Thursday I was lucky enough to join a mushroom foray with SVIMS’ evening speaker Robert Rogers, from Edmonton, who was in town to talk about the medicinal uses of mushrooms. He described himself as a herbalist rather than a mycologist, but was pretty quick off the mark when it came to talking up the medicinal benefits of what we found in Francis King Park.

First up was a Turkey Tail (Trametes versicolor) on the park gate. 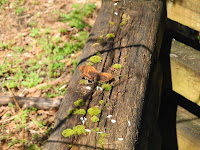 Better specimens found later on. Robert says it is the most important medicinal mushroom in Japan; the healthcare system there spends around $2.5bn a year providing it in extract form to post-operative cancer patients. In one study the placebo group had a 4.6 yr survival rate, while those taking a daily supplement survived 10.6 yrs post-op. He said it was an immune modulator and an important mycoremediator: its mycilium masses can convert PCBs and petrochemicals into CO2 and water. And it’s edible – just – a sort of mushroom chewing gum. 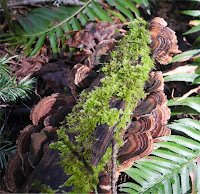 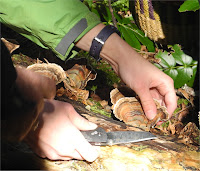 Many were the Polypores. Here a Ganoderma tsugae, one of the Reishi mushrooms. The Reishi is said to be the most studied mushroom of all time. It’s easily collected; best to work with when younger and spongier, as it’s easier to slice before processing. To prepare it you need to get polysaccharides and other matter out first, and through a series of soakings and decantings make it into a tincture that can be taken for various conditions. It modulates the immune system (perks it up when depressed, damps it down when over-active, as in the case of rhumatoid inflammation, lupus etc.) as well as reducing inflammation (and it is inflammation after all that kills us). It’s a great anti-cancer agent because it interrupts the cycle of cancer cells (via Apotosis 53: a point in self-cycled growth where cells are dividing) so can help prevent cancer formation. Chinese medicine uses it for esophageal carcinoma and indigestion. 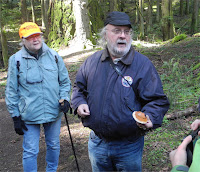 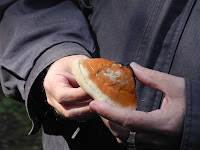 Mushroom hunters use all their senses in identification. 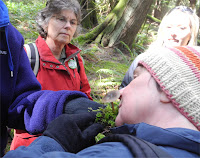 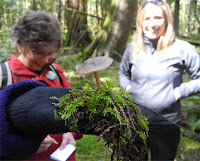 Inocybe sp. — is this the LBJ of mushrooming?

Spring in the rainforest: skunk cabbage and trilliums: 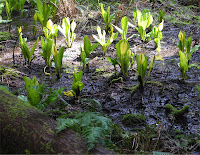 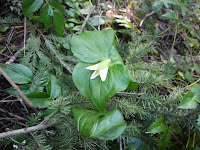 That evening at the meeting Robert went into more detail about a selection of mushrooms. But first we took a look at a Black Morel (Morchella elata), and observed the way the cap is integral to the stem, which is the way to distinguish a true Morel from a false one. It is of course an excellent eating mushroom, but one that can cause some diners upset, particularly if consumed with alcohol. 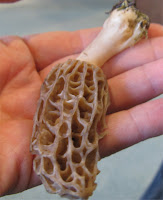 Then we heard about the beneficial properties of common edible mushrooms like Shiitake (Lentinula edodes) which a San Francisco hospital apparently found to be as good as any of its existing retroviral drugs); and it’s a cardiovascular regulator, preventing “hardening” of arteries, coronary embolisms, varicose veins, and helping with cholesterol problems.

The Enoki (Flammulina velutipes) cultivar is the only mushroom that Robert recommends eating raw; it is a cancer-preventive food, and one of the few to have undergone trials on breast and ovarian cancers.

Even the button/crimini/portobello mushrooms (Agaricus bisporus) got mention: don’t eat them raw, he says: some compounds may be toxic. But they are aromatase inhibitors (as are nettle leaves) preventing replication of hormone-sensitive cancers (prostate, breast). Regular consumption can act as good prophylactic. Reduction in breast cancer through eating these was found to be 67% but when combined with green tea, raised the reduction rate to 97% .

Oyster mushrooms (Pleurotus populinus; P. ostreatus) is a cholesterol reducer, containing lovastatin. Mitochondrial cell efficiency is affected by statin drugs (this inhibits Q10) but not by eating mushrooms. Two meals a week, he says, are as effective as statin drugs. They prevent build-up of placque in arterial walls, and are protease inhibitors: when the liver starts to shut down, cholesterol levels rise, but oyster mushrooms prevent both, and are antiviral as well. And an important mycoremidator – oyster mushroom mycillium can help clean up environmental messes (an idea Paul Stamets explains in his TED Talk).

There were many more besides.. described in fascinating detail in Robert’s book, The Fungal Pharmacy – Medicinal Mushrooms of Western Canada.

And on Friday, I was one of a multitude attending a book launch for new collections by two grande dames of Canadian poetry: Susan Musgrave (Origami Dove) and Lorna Crozier (Small Mechanics). 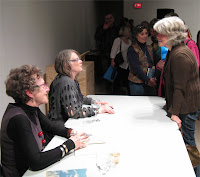 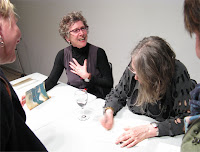 A stylish and hilarious evening, fuelled by quantities of sushi from the restaurant next door.