In my continuing quest to understand the elusive factors in meat production and climate change, I came across an archived broadcast of BBC journalist Simon Parkes‘ investigation into the carbon footprint of milk in Britain. It’s an interesting story and the factors that affect methane production are not always what you might think. (Download RealPlayer if your media player has trouble with .ram files)

On Friday I was attended Kate Braid‘s reading at Planet Earth Poetry. She’s published two books this past year, and she treated us to readings from both: Turning Left To The Ladies – about her past as a construction worker; and A Well-Mannered Storm: The Glenn Gould Poems. Making reference to the passing of PK Page, she also read Page’s poem, “The Filled Pen” and another by Rumi.

And on Saturday I attended some of the Big Leaf Maple Syrup Festival in Duncan, which was positively mobbed by visitors of all sizes, and who wouldn’t be drawn by the twin attractions of sugar and train rides? I missed out on the train, but took in the syrup tasting, held in the old school house at the Forest Discovery Centre 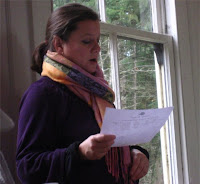 for Slow Food, using this Maple Products Flavour wheel as a guide to aromas and flavours. We sampled half a dozen local syrups and one Easterner for comparison. 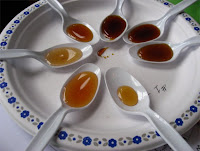 A producer panel gave us a chance to hear from some of the Sap Suckers, who spoke about the ins and outs of tapping maples, as well as evaporation, 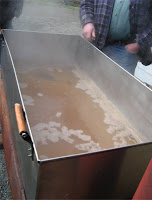 bottling and hygiene issues. One of the best we tasted, I thought, turned out to be a science project by a local schoolgirl! 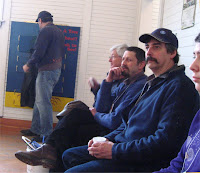 It’s a different flavour from the commercial maple syrup, which is smooth and sweet with no real aftertaste. This stuff has more complex flavours, and, I thought, quite a bit of green twig on the finish. As the participants attested, many of them voting for the Eastern version, we tend to prefer what we’re used to, and if that is a fairly bland sweet taste, that’s what we’ll go for. Bitterness is a hard sell in North America, which doesn’t feature much from that part of the palate in its cultural preferences. The flavour wheel itself was developed around Quebec syrups, so maybe it needs a couple more spokes for Western ones.