The lovely Saskatchewan-born neo-formalist Elizabeth Bachinsky shared her passion for sonnets with Kate Braid’s form class in Nanaimo last night. She is very fond of palindromes and Sapphic stanzas as well, and her first book, Curio, included a translation into anagrams of part of The Wasteland. She has done some wild things with Google search results too.

There was a preliminary discussion of meter, and while reading the chapter on Iambic meter from the excellent text, An Exaltation of Forms, we ran into diverging opinions on how to scan the line, which I now learn is “oft-debated” in scansion: “When to the sessions of sweet silent thought” (–Shakespeare, Sonnet 30).

Kate said that Keith Maillard had once told her that it was important not to confuse rhythm with meter and that this had made sense of the metrical world for her. If I’m paraphrasing her correctly, she said that rhythm has more to do with the emphasis we might put on a line when we read it, and meter is the more abstract “unreal” template we put over that line to measure it, within the context of the rest of the poem.

I’m still puzzling on that, but I found something that supports Maillard’s view, if music and poetry are this strongly connected, on a page about music theory. It says:

Many modern conceptions of rhythm and meter place them in opposition. Rhythm is often defined to consist of the actually sounding durations of music, while meter is the alternation of strong and weak beats, or the interaction of pulse strata, that are inferred from the rhythm. Rhythm is thus conceived as emerging and active— a “concrete” patterning that is measured by, and heard to work with or against the “abstract,” deterministic, rigid metrical grid.

Does that make sense to anyone? A couple of us thought the line (see second paragraph above) could be scanned as more or less straight dactylic tetrameter (quibbles over whether “silent” could be read without an initial stress, in context), but others wanted to put it into iambic pentameter with a double ionic (unstressed/unstressed/stressed/stressed) foot in the middle and a trochaic substitution in the first foot.

Ok, any [other] prosody geeks out there? For the rest of us, I like this page for a nice basic summary of meter. And I was having a little fun today with this one that has some online quizzes and tutorials on prosody.

And for those of you who prefer food, here’s what I had for supper last night (Rich Leek Tart, it’s called). Obviously I have a long way to go as both a cook and a food photographer, but it was pretty tasty. The leeks were sweated for about half an hour, with minced shallots and a couple of sliced mushrooms, before being mixed with strained yogurt, swiss cheese and eggs, and the result was sweet and dense; it almost tasted like I’d added sugar. 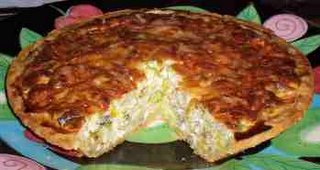