Last weekend, in an attempt to escape the unending heat of Parma, we took a trip to the seaside, in search of cooling breezes and nice chilly marble museums. We found a breeze or two, and a few other things of interest.

We arrived in Massa and hopped a bus to the seaside which was large and developed. While looking for the information office we passed a rabbit park which was, well, hopping with rabbits. And little horses. And a lot of signs, like these ones. 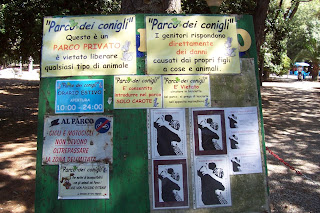 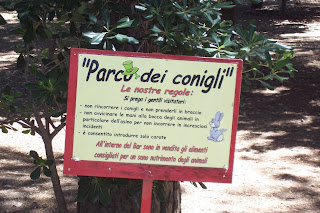 A half hour or so in the information office was enough to convince us we didn’t need to stay in Massa, and while searching for other diversions, we spotted a castle in Aulla, which if all else failed was at least on the way back to Parma. And indeed it was a castle, the Brunella Fortress. Its address is number 3 Via Fortezza (why not number 1??) and within it we found a small natural history museum, with a few items of interest including a collection of rather sad looking stuffed animals. Nice views, though. 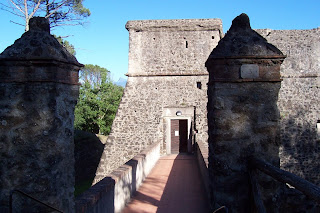 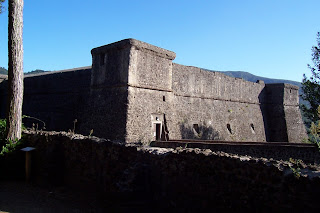 We walked up the hill and then down the hill. We passed a nifty looking fence. 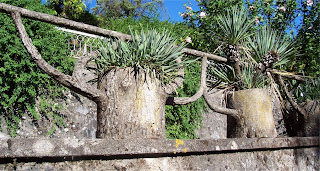 And then in town, I made the acquaintance of a poet, Ceccardo Roccatagliata Ceccardi (1871-1919), who touched down for a few formative years in Massa (but not as far as I can make out in Aulla) during his life of poverty and peregrination. It was some consolation to having missed the Parma poetry festival… 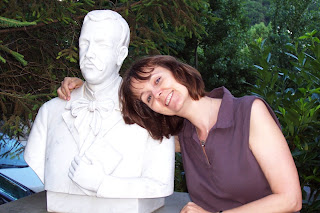 We escaped back to Parma having found only this in the way of sustenance: is it Italy’s answer to Cheez Whiz? 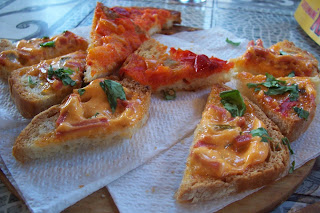 After that, mercifully, it cooled down for a few days in Parma. We had our wine tutor Sandro Bosticco back for some informative tastings, and then spent the rest of the week alternately in a journalism workshop with Corby Kummer and learning about consumer psychology from Nadia Olivero.

Last night, a return visit to Ristorante Mosaiko: very nice indeed. We talked to chef Davide who told us his training route included France, England, Japan and Australia, and before that enjoyed the tasting menus: seafood for me, including in-house smoked salmon (with a touch of wasabi), followed by a mosaic of octopus on a tart nicoisey salad of green beans, potatoes, carrots, capers and more: 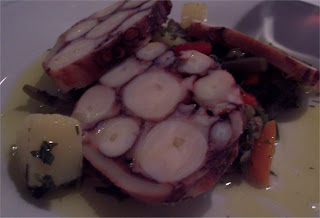 followed by some awesomely artfully seared tuna with fennel, oranges, olives and tomatoes and a tantalising pinch of je ne sais quois: 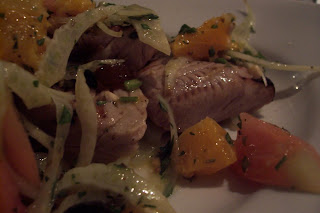 and what do you do when you can’t decide which dessert to have? Have them all of course. That Piemonte classic, bounet, like a chocolate/nut creme caramel as Corrie so rightly observed: 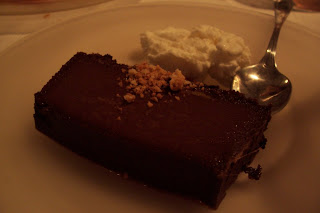 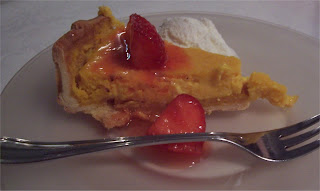 And the winner was… simple is best? delicious strawberries laced with citrus and topped with yogurt gelato: 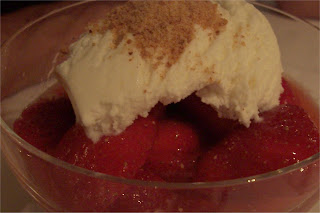 And with that it will be over and out, for a while, as we head to Catalunya tomorrow.