Lovely lavender and scourge of the wireworm

The Canadian Organic Growers, with chapters across the country, has a lively membership on Vancouver Island, which includes summer farm tours in the area. Yesterday’s tour took us to Cobble Hill to see a lavender farm, and on to Cowichan Station to visit a CSA operation that offers grain and vegetables to subscribers.

We started at Damali Lavender Farm and B&B, 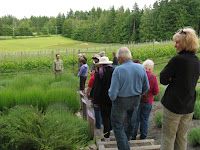 where they grow lavender 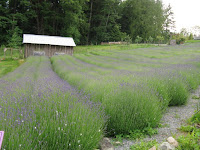 and grapes (Castel) – which they had been selling to winemakers but are now turning to premium wine vinegar. 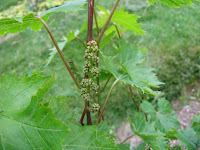 There’s a labyrinth there, used occasionally for workshops and special events 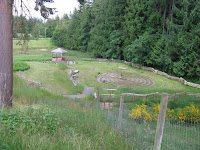 We had a good look at the lavender still, 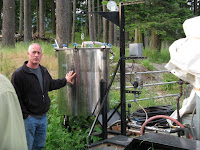 which is used to extract essential oils. Not an inexpensive piece of equipment, they invested in it after making do with a smaller version their first couple of years, and it’s reduced the workload hugely; from 16 eight hour days to one. It’s portable (they have a trailer to allow them to move it) making it possible to lease it out to others who want to press essential oils from various sources such as fir.

After an aromatic turn round the gift shop – everything from essential oils and soaps to teas (chocolate mint and lavender being a popular one) and vinegars – we departed for our tour of Makaria Farm in Cowichan Station. It’s a 10-acre fruit and vegetable farm, famed for its peas and strawberries, and also for its innovative grain CSA which it started last year, born of Brock and Heather’s desire to learn about small-scale grain production. They’d come across a copy of Gene Logsdon’s 1977 classic Small Scale Grain Raising:An Organic Guide to Growing, Processing, and Using Nutritious Whole Grains for Home Gardeners and Local Farmers and were inspired to experiment with its concepts, while bringing in local experts like Tom Henry to offer on-the-spot guidance; by bringing in 55 other families they were able to share the knowledge, and workload, more widely. This year the grain CSA is more streamlined, with participants coming in to help with the harvest instead of maintaining their own plots.

This year’s plantings have been hugely damaged by pests above and below the soil. Wireworm has devasted the couple’s plantings, 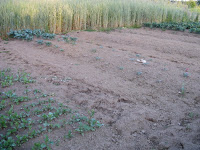 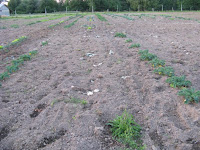 they suspect in search of wireworms. This has led to a heavy investment in modern scarecrows – motion-sensitive water pumps – 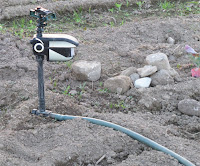 and experiments in stringing off portions of the fields in an effort to keep the birds off.

Here’s a field that they planted and worked and then forgot to turn the scarecrow back on for just one night: by the following morning this was the scene: 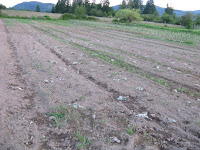 They have done some epic work in soil-blocking, using old bread crates to hold them, 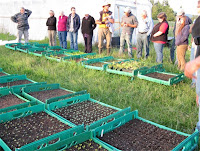 and a fancy machine (designed to plant into plastic mulch, in fact) to plant them. 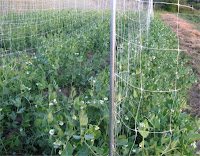 and strawberries are thriving. 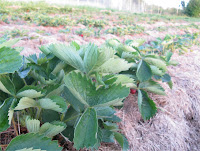 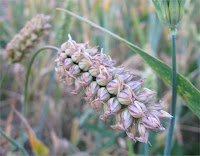 but the Red Fife wheat

has been stricken by rust. 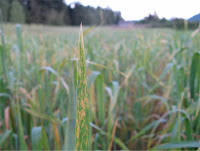 But the beneficial insects seem happy and fruitful, at least. 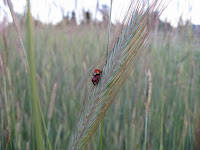