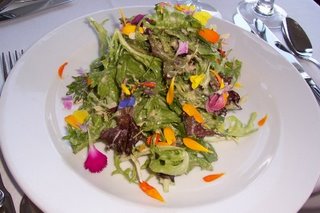 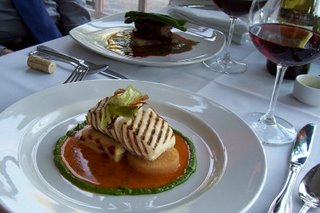 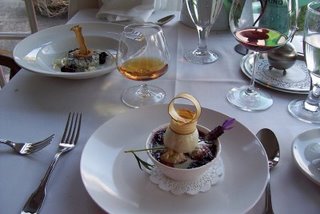 So just when my words about not knowing anyone who dines at Sooke Harbour House fall from my fingers, I get invited to dinner there. It is very good food, and they certainly go to great lengths to make it look very pretty, as you can see from photos – capturing only three of the four courses we were offered. The salad I thought was a dish that would go with any outfit. I especially liked the herbal wall that surrounded the moat of sauce (TOO many ingredients to name here) beneath the island of grilled halibut. Perfectly cooked fish: hard to beat. I did not check to see if the head dress – perching on my lavender ice cream which surmounts a couple of rosemary dumplings adrift in a wild berry sea – was edible. But most things were so I wouldn’t have been surprised.

To give you a sense of the style of the menu descriptions, had we been there on Thursday we could have had as a starter a warm smoked sablefish served with asparagus, sundried tomato, chervil, bulgur and caramelized onion bundle, sauteed gooseneck barnacles, daikon miso foam and Grand fir oil. At least there is a stunning ocean view to rest your eyes upon while you try to work out what all that would taste/look like exactly. Last night a couple of eagles drifted by, a blue heron, and one harbour seal on an evening fishing trip.

After dinner we checked out the art which is hung on every public wall – an informal gallery really – and then the garden which surrounds the building; lots of borage and calendula which are popular ingredients in many of the dishes. I had read that you won’t get a lemon with your fish because it’s not a local product, but I was glad to see they had apparently stretched the line for a few staples such as flour and sugar.

There was an interesting experiment – the 100 Mile Diet – done recently by a pair of Vancouverians who ate only local produce (from within 100 miles of their home) for a year, and they mentioned in a radio interview that wheat was the most difficult thing to give up, although they eventually did find a wheat farmer and were able to have bread and pasta again. Their website gives Canadian and American readers a tool to find the 100 mile radius round their homes if they want to try it too.

One Response to Local food at Sooke Harbour House