Le Marche – Our Day of Pork 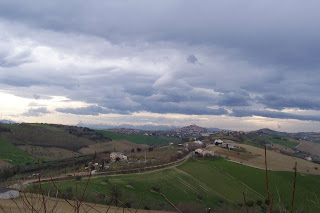 View from a Trattoria.

The topic of vegetarianism has been well discussed by all of us on this pork-fest we call food school. This is repeatedly no course for vegetarians; even as the borderline veggies among us are starting to scramble back to the clean side of the line, the omnivores are talking more and more obsessively about vegetables, between bites of whatever part of the pig we’re eating this meal. It was all taken to extremes on Wednesday when we had a food history lecture on pork, followed by a bit of salumi, followed by a six course meal of… pork. 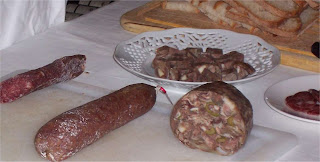 Salumi, including (I hope I have these right): Ciavuscolo, a soft, spreadable salami flavoured with garlic; Salame di Fabriano, a knife-cut salami with whole peppercorns; and Testa in Cassetta, or head-cheese, this one including olives and almonds. 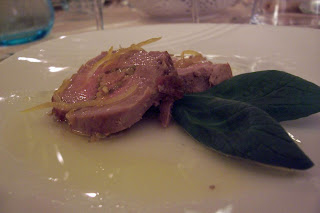 We watched the sun set over the Sibilline Mountains while we heard about the pig’s rise and fall in myth, religion and practical matters of the table (an excellent post-script for me, having listened only last week to Barbara Klar’s similarly broad-ranging treatment in Swine Before Pearls on CBC). 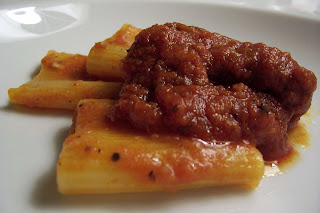 We heard about the ‘intolerance soup‘ made of pork that was served in a far-right sponsored soup kitchen in Paris only last year, which sought to divide the hungry – through religious dietary observance – into the ‘real French’ and those who the group sought to exclude through a culture of food. 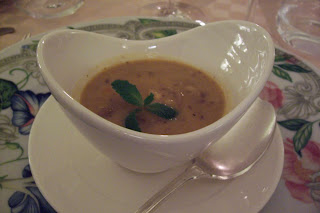 Then on to the pig’s misfortunes which begin in etymology, its name tangling with the human body in Latin languages; in Italian, porco/corpo; in Latin, porcus/corpus; in French, porc/corp; and so on. 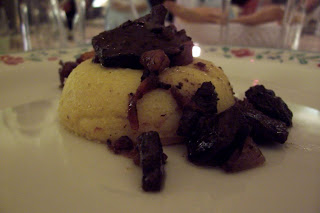 A forest-dwelling creature, and one whose diet makes it a competitor for food with a hungry human population, the pig’s fortunes suffered with the historical rise in agriculture and the reduction of its habitat. And religion stuck its oar in. St. Clement of Alexandria bad-mouthed it for its omnivorous and unwholesome appetites which might contaminate those who ate it with similar behaviours, and advised that a pure life is one without pork. Unfortunately for believers in pure theory, at the end of the Roman Empire, with Goths battling the Byzantines all over Le Marche, the area suffered a 98% reduction in its population, with whole villages committing suicide in times of imminent starvation. So the hungry inhabitants turned back to more practical pagan worship which at least allowed them to eat something that was gaining ground as the forest began to reclaim agricultural land. 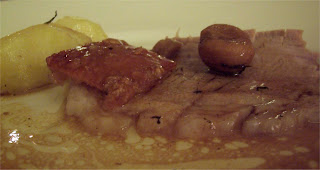 Needing to restore control, the pragmatists in the Christian church had to think of something. In accordance with the long tradition of Christian colonisation of pagan festivals, Feriae Sementivae, the winter feast of Ceres (Cerere / Demeter), the Roman goddess of grain, to whom swine were sacrificed, morphed into the feast of St. Anthony, who picked up the Christian thread and became friend to swine. At his feast there might be blessing of the animals, or the serving of bread, the crumbs of which would be taken home for the animals. 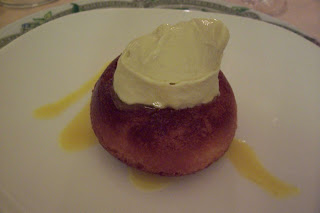 And finally, dessert: Savarin con gelato di pistacchi salata (as far as we could see, pork-free, but I’m not betting my life on that)

There is much more pig mythology we didn’t get into, and much more to say about pigs in general than can be reported here, but our speaker left us with a few tantalising thoughts: pigs helped us to reinvent our world, he suggested; should the American flag not more appropriately feature the hot dog rather than the stars or stripes?