Joel Salatin – Man of many hyphens

The Cowichan Agriculture Association managed to lure farmer-speaker-activist Joel Salatin (he actually prefers the label Christian-Libertarian-Environmentalist-Capitalist-Farmer) to come and spend the day speaking in Duncan last rainy Saturday. The house was packed – I’d guess around 200 folk, mostly farmers, many of them young – and he put on a good show, commencing with a slideshow talk about Polyface Farm.

From this we learned about his ways with cattle bedding, which were surprisingly complex. He keeps the cattle in a shed, roofed but mostly open, and lays down whatever wood chips (=carbon!) he can get hold of. This absorbs the cowpies and urine so that conditions are reasonably sanitary (any farm that smells bad is a badly managed farm, according to Salatin). He scatters corn into the chips every so often. And keeps layering like that until winter’s over, by which time the bedding could be up to four feet deep. He has devised supports to keep the cows from toppling over, and cantilevers to keep their hay at mouth-level. Once the cattle are out in the fields again, he brings in the pigs, who root for the fermented corn and in the process turn over the compost, aerating it and making it ready to spread on the fields to grow the forage for his cattle. So pigs, cattle and farmer = all happy.

From there we go to the fields where the pasturing is similarly well thought out and involves chickens and a lot of mobile fencing. In fact mobile equipment is big in Salatin’s vision: he doesn’t believe in single-purpose equipment and he really likes to be able to move his animals around the fields – and woods – so that he can manage their feeding and the fertility of his soil at the same time. 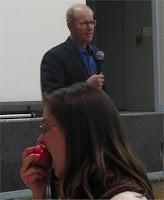 He is truly a libertarian, wanting freedom from the shackles of government regulations which, he couldn’t say forcefully enough, are intended for the industrial farming practices that have crippled farmers’ ability to make a living, severed the eaters from knowledge of what they eat, and poisoned our food.

He was generous with his time answering questions and sharing opinions on everything from the timing of hog slaughter to how to cook grass-fed beef to why he likes hobby farms. He recommended many books, including New Rules for the New Economy by Kevin Kelly; Guns, Germs & Steel by Jared Diamond; and City Chicks by Patricia Foreman (whose husband Andy Lee wrote Chicken Tractor). As well, of course, as his own books, most notably Everything I Want to do Is Illegal.

And he described some of the innovations he’s come across – evidently a pleasing sideline for him in his extensive travels – that are helping to save “embedded heritage local food systems from the machinations of large scale industrial food systems.” Some examples: The Urban Farm Store in Portland, Oregon; the New Roots Urban Farm in St Louis, Missouri; and the Local Food Hub in Charlottesville, Virginia.

While he advocates the “just say no” approach to the enforcement of unreasonable regulations wherever possible, he also has a simple suggestion for all of us: learn to cook from scratch. “Opting out of processed food is the ultimate mark of independence.”

And if that ain’t enough, here’s the man himself, talking food safety in Portland Oregon last summer.

0 Responses to Joel Salatin – Man of many hyphens