Phew, a week seems to have got away from me. Wandering round Parma on Sunday the 13th, I came upon a big party right around the corner, on strada Farini, which had been closed to traffic and lined with street vendors, with nearby gardens and galleries open to viewing. All good street parties in Parma seem to involve strategic use of turf, and this one was no exception, going a step further, adding a fountain: 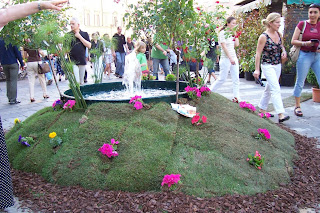 If the week before was visual, last week was, well, audio-visual. We divided most of our time between Barbara Santich, visiting from Adelaide to tell us about Medieval food history, and Simon Parkes, from the BBC Food Programme, visiting from London to talk about food radio.

We kicked off the week with an all-day tour of the Barilla Pasta factory near Parma on Monday. Oh no, we thought, a dreary day of PowerPoint presentations followed by endless trailing around to see more large shiny machines… but happily there was more to it than that.

Though we did commence, as all 21st century students surely do, by sitting helplessly in a room for half an hour or so, watching a series of mildly concerned staff members take turns having a go trying to persuade the projector to talk to the laptop, and when that didn’t work, trying another laptop, another staff member, another cable, and so on. Enough time had fallen off the clock to convince the plucky marketing chap to plunge in, armed only with a box of spaghetti and a head full of company history. He did very well off the cuff, and by the time the technology was awake he’d covered a good chunk of time.

We had technical talks too, which luckily followed a not-too-distant class in pasta technology, so we were old hands at distinguishing common wheat from durum, and were already aware of the legislation requiring the use of durum wheat for Italian dried pasta; we knew about different gluten actions in each, and of course familiar with potential major flaws in dried pasta. We heard about the work of the research department to produce the perfect balance of protein, gluten and yield in its various strains of durum. We heard that Barilla buys a large percentage of Italy’s durum production, and some of the rest from the US, where it has both mill and pasta factory. And we did see some big machines that were churning out a lot of strands of spaghetti, and were treated to a large lunch of pasta.

Back to the halls of learning on Tuesday, in Barbara Santich’s classes we enjoyed a walk through Medieval foods: heard about some of the foods that were prepared for feasts and how banquets began; and reviewed the astonishing number of days set aside each year for fasting and religious observance that affected foods. We looked at some recipes that had made their way down the years from early cooks such as Apicius, and talked about some of the spices that have pretty much disappeared from Italian food, like dill, cumin, mint, coriander and asafoetida; heard about the influence on cuisine from Arab traders who introduced such foods as citrus fruits, buckwheat, cane sugar, spinach, eggplant and lots of spices to the Mediterranean.

Next, Simon Parkes had us work on a six minute radio piece, which was a challenge to complete in two days. One night, really. It involved the use of some sound editing software which worked better for some of us than others but we had fun with it and enjoyed listening to the final products on Thursday afternoon.

And at that point I flew away to London for the weekend.

0 Responses to Industrial pasta, arab influences and the spoken word