Went on a field trip on the weekend, with the BC Sustainable Energy Association, to see the Elkington Forest development site, way up on Malahat Mountain. 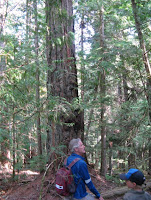 The site is not the easiest place to get to – steep windy roads which would be pretty much inaccessible when it’s foggy or icy, and the developers intend to keep the roads between the development clusters as narrow as possible, to intrude less on the landscape.

On our way up, we passed acre after acre of clear-cuts, with ‘for sale’ signs stuck on a number of the lots, which are divided into 5-25 acre parcels. It is this kind of development that the Living Forest Communities is trying to counter. The problem with hacking forest land into parcels is that the developers can’t resist cutting down the trees (great profit in that) before selling them off. When you do that on a large scale in a watershed area, you’re looking at creating erosion, destroying ecosystems and contaminating water supplies.

Have a look at the deforestation story told by these aerial photographs – covering just the last eight years. Precious little forest remains on the mountain, and the damage is only just starting to be visible on the Malahat Drive where heavy equipment, “for sale” signs and clear-cutting are intruding on what used to be a pristine forest drive.

Pristine in my lifetime anyway. The Elkington family bought the property as a summer retreat, after it had been clear-cut in the 1920s, and let the forest regrow. It has been logged since, but not clear cut, so there is still a lot of actual forest left. 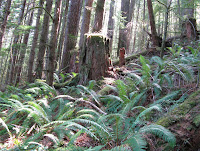 The developers hope that by clustering the houses that are built – and all to strict environmental standards, including state of the art sewage treatment – more forest will be left, preventing erosion, protecting habitat and allowing sustainable enjoyment of the area for years to come. The Trans-Canada Trail will cross the property at the first of three housing clusters, in fact.

There is land set aside for agro-forestry purposes, which include a community garden for all the residents. There will be an eco-lodge, and several thousand square feet of commercial property, but the population will be too small, the developers think, to sustain much in the way of shops or services, and the commute not really feasible. So the site is intended for families who can live and work independently: they hope for artisans and telecommuters. Local businesses have expressed interest in supplying the residents with food and services, and there is a train line which – should it survive its latest round of critical assessment – could conceivably serve the community. 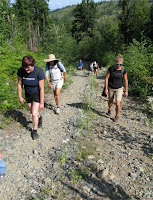 It was a nice hike on a beautiful day, anyway, and when we finally stopped at the top for lunch,

we were ready to sit down and drink in the view for a while.