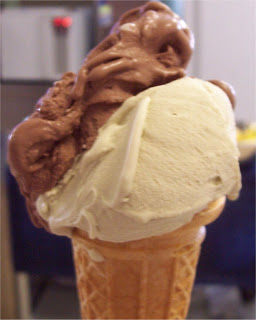 We spent Thursday at Gelato U, learning some things from the gelato equipment manufacturer Carpigiani, near Bologna. What did we learn? Hard to say. In a course really designed for companies who’d bought the incredibly expensive (25,000-35,000 euros for the basic gelato maker) equipment, we were given recipe after recipe for making four or five kilos of gelato at a time. 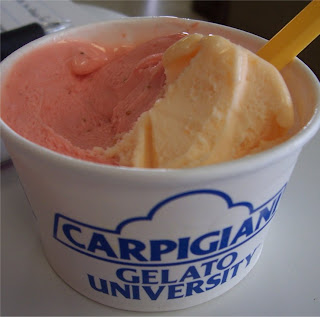 The instructor began with some distinctions between “ice cream” and “gelato”. Ice cream, he said, was made in high volumes, and so could not use fresh ingredients, but tended to use industrial flavourings. Gelato on the other hand, could be and was made artisanally (his definition of artisanal: not necessarily made at home, or even by hand, but in small quantities), with fresh ingredients. Another main difference was the over-run, which was 100% in ice cream and more like 45-50% in gelato; this turned out to mean the volume of air pumped into the final product by the industrial — err, artisanal? mixer/freezer. And a final difference was the fat and sugar ratio: gelato is lower in fat but higher in sugar than ice cream. He observed that higher fat doesn’t automatically result in a softer product, since fat freezes solid, so the serving temperature will have more to do with its texture than anything. 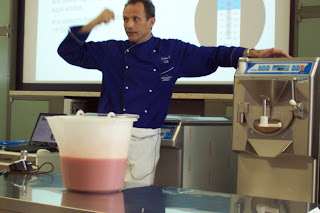 After dutifully noting all that down, we had to wonder anew what was really meant by ‘fresh ingredients’ when we watched the making of gelato. Yes, fresh fruit was used. But so was a powder which included stabilisers and emulsifiers, and protein, in the form of milk powder. And we were told that although fresh milk is a good ingredient, you could as easily use UHT or sterilised milk. To add fat, you could use fresh cream, but you could also use butter (as long as it was industrially-produced butter, made by centrifuge, and not the lower-tech kind made by skimming, as this could introduce bacteria into the mix). And all kinds of calculations come in when adding sugar: dextrose, sucrose, fructose all have different degrees of sweetness which must be balanced with the sugars introduced by fruit or other flavourings. The instructor spoke fondly of the companies who have laboured long to save the gelato maker the toil and trouble of crushing his own pistachios, and produced a neat tin of flavouring ready to pour. Here we see a nice can of hazelnut going into the mix. 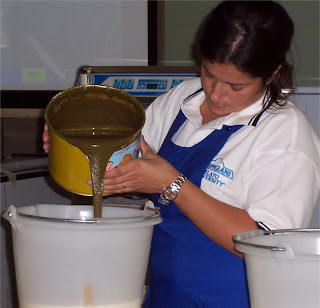 The original gelato recipe, which originated (in Italy!) consisted of: milk, sugar and egg yolks. Apparently eggs are not used much now, because they make the gelato taste, well, eggy. Which is apparently a bad thing when you want to make it taste of many other things. So, gelato makers have isolated the functions that eggs served (fat to add texture and bind ingredients, protein to add structure, emulsification to smooth things out) and introduced powdered substances that may include alginates, pectins, starches, xanthan gum, gelatin, lecithin, guar gum and carageenan (identified by E numbers). The one gelato flavour that is still allowed to taste, or at least look, eggy is Crema, which is really only ‘custard’ flavour, and I had to wonder if fresh eggs are ever involved… 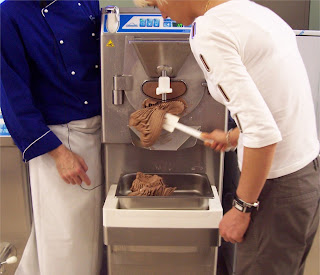 We sampled both sorbet (below, in lemon) and gelato (above, chocolate). In the demonstration we saw, the mix for the gelato needs to be ‘aged’: the milk, cream, stabilisers, emulsifiers, protein and sugars are combined, heated to 85 degrees celcius and then cooled, ideally overnight, before adding flavourings. This improves the texture, allows the mixture a longer shelf life (three days) and improves the flavours. Quite, well, all those powders after all; we did not learn whether if you used old fashioned ingredients like milk, eggs and sugar, the flavours would meld without aging.

A few other distinctions we learned: sorbet (sorbeto, sorbetto) is gelato made with water instead of milk; granita is gelato without the air (from mixing), stabiliser and emulsifier (it’s slush, basically); and semi-freddo (aka gelato caldo or gelato alto) is made with vegetable fat. Not sure about the last definition; I think the term semi-freddo, or indeed semifreddo, is used differently by different people: I’ve seen it used for various frozen desserts. 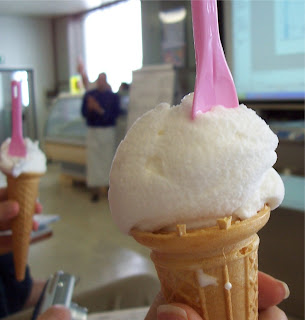 The verdict? Disappointing. The flavours ranged from bland to unbalanced, the texture fatty. The words “artisan-made gelato” will not impress any of us in future, since all they mean (as in fact we’d heard as well from another of our lecturers) is that the seller has mixed his batch of formula, from what we know now are bags of stabilisers and powdered milk, and poured it into his expensive machine in small quantities, and put it into the display case at what we hope are frequent intervals. The skill, I suppose, lies in the chemical skills of the mixer, the kind of milk and cream used, and the intensity, purity and freshness of the flavourings. Further research at Grom, K2 and other favourite outlets will be needed. We are all off to Piemonte next week and I hope will have occasion to revisit the excellent cafe/gelateria in Bra that we stopped in on a cold day back in March, which features some dazzling Presidia flavours.