Food security on the Island

I went to Courtenay to attend a day of meetings on food security last Friday, organized by VIHA and held at the Crown Isle golf club. Not the most appropriate setting – all that farmland covered with artificially managed turf is a bit troubling to say the least – but it was comfortable, and the food was good.

About 90 of us, I’m told, made the trek from all over Vancouver Island and the Gulf Islands to sit together and talk about food security. The concerns were many and of considerable weight: though there’s been questionable record-keeping on our food supply on this island, it’s considered accurate to say that only 5-7% of our food is raised here; the rest is ferried over from the mainland. There are widespread concerns about the water crisis in California which will inevitably affect our food supply over the coming year. Like the rest of the Western world, we have food quality challenges – and the correspondingly poorly nourished and increasingly overweight population – that are increasing the strain on our health systems. And we as a planet sit on the edge of predicted world-wide shortfalls in food.

So there is huge impetus to improve the island’s self-sufficiency in food production, against the economic and political weight of real estate development. The agricultural vote has historically been too low to get the attention of politicians — but there is a provincial election coming.

We broke into groups to tackle food security (“A situation in which all community residents obtain a safe, culturally acceptable, nutritionally adequate diet through a sustainable food system that maximizes self-reliance and social justice” –Hamm & Bellows, from a 2003 article in the Journal of Nutrition Education and Behavior) by discussing three questions. Firstly, what knowledge, skills and abilities are needed in communities to become food secure and work towards sustainability, and how are these to be identified and shared; secondly, how do communities move towards long term food sustainability while dealing with short-term and immediate needs; and finally, how do we work together to become a collective voice on food security, and what steps can we take today to improve the security and sustainability of our food supply?

There was a lot of discussion, of course, from nurses, nutritionists, farmers, students, chefs, food retailers and more. Some points I found interesting:

Some interesting organisations, places or sources of information I encountered at the meeting include:

And all that talk about food makes a person hungry. We had started off with a good breakfast – smoked salmon hollandaise, house muesli, fresh yogurt and so on – and broke for an even better lunch. I don’t think I’ve been at a meeting that had such a good one. Fresh local greens, lots of seafood – including beautifully cooked planked salmon, Fanny Bay oysters, crab legs, spot prawns, tuna carpaccio and several smoked fishes – and apple-rhubarb crumble and local cheeses to finish. 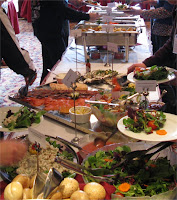 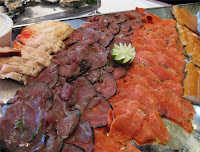 Well deserved kudos to the chef. 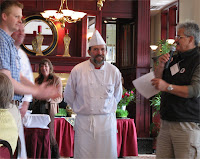 In the last of the three sessions I was in, about steps that can be taken now to help the food security situation, we had a participant who floated the idea of an Island food infrastructure investment fund – a fund that could be drawn from in order to tap the many matching grants that are out there but beyond reach since few have the money to kick things off. So by the time we left the room the fund had begun at $60. By the end of the wrap-up plenary, it had jumped to $250.

As we left, there on the golf course was a small crowd of wild food to wish us farewell. 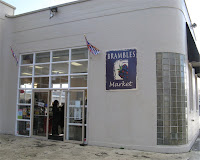 which sells only local (Vancouver Island or BC) products. I’d had some gorgeous beets (golden and rainbow) at the reception on Thursday which had come from here, so I made a beeline for the produce (a lot of which comes from my local farm shop hangout, Michells). They had many other tempting things too, including tins of line-caught albacore tuna, an amazing looking meat counter (they make all their own sausages), lots of great fruit juices, local cheeses and chocolates. Lucky for my food budget I was taking the long way back to Victoria so had to pass on the perishables.

That night we said a proper farewell to Courtenay at Locals, an exceptional restaurant tucked away in a strip mall. 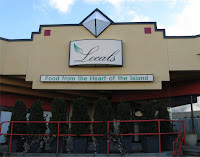 As its name suggests, it serves local foods and wines. Everything we had was excellent, from the smoked tuna salad with its natty daikon sash 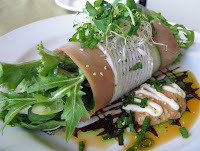 to the fresh sablefish – baked in a cloak of fennel 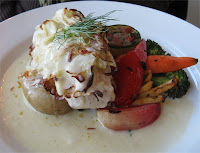 or pan-seared in sesame seeds with a bit of black bean, and some nice fresh vegetables – more pretty beets – 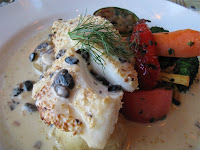 and since the dessert menu is abnormally tempting, they offer a boon to the indecisive, a sampler that includes pumpkin-chai latte brûlée; a chocolate tower; lavender ice cream with oregon grape jelly; and a kind of apple crumble which was much better than that may sound. 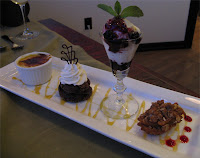 After a last stroll along Fanny Bay – where we experienced the other side of the herring run, which is the herring roe that washes up on the beaches

in such quantities you think at first there’s been a spill of sawdust – it was time to head back down the island.

0 Responses to Food security on the Island