Fish fraud, winter veg and a bit of poetry

Long Ago In Italy… we had a splendidly mind-blowing talk from a veterinarian on the subject of fish fraud: how consumers were being sold cheap or endangered fish under the name of popular varieties. The reason was much the same as the one that has plagued most of our food problems nowadays: we are out of touch with our food sources. In the case of fish, we buy fillets and portions instead of the whole, head-on creature, so we are forced to trust commercial interests to tell us the truth.

Which we have been learning over and over is not the actual intention of commercial interests, who exist to make money at any cost. So, whoever’s reaping the rewards of this deceit, here’s an interesting article about fish fraud in Canada. Buyer beware.

The weekend’s entertainments were totally fish-free, although there was enough water falling from the skies to drown a few.

Sunday we had the Winter Vegetable Potluck, generously hosted by Don & Ramona, which featured buckets of colour and flavour. Below, I diligently compare the tint of mulled wine with that of magenta bread (made with roasted beets). 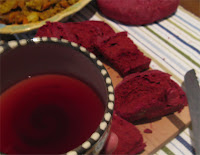 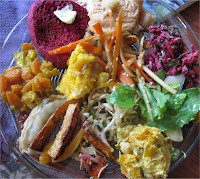 That appetiser was, in fact, the handiwork of Bill Jones, who demonstrated the Japanese mandolin on which his interns ritually lose bits of their fingers (but not he, luckily)

and then whipped up his treat, which he says can be made with burdock root instead of parsnip. 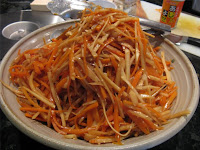 There were about 20 in attendance, which was pretty good considering the rain and fog that those of us from Victoria had braved on our way to Cobble Hill. But some of us will go a long way for a rutabaga chip, especially now that we’ve tried them…

On the poetry side, I was able to spend my Friday 13th doing a star turn – well, a mezzo-star turn – sharing the stage of Planet Earth Poetry with Wendy Donawa and airing a few more poems. Very pleasant time and a lovely crowd, nice to catch up with a few people I managed to persuade out into the literary realm for a couple of hours.

2 Responses to Fish fraud, winter veg and a bit of poetry