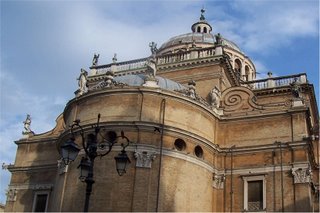 Here I am in my very own microcosm, in the Hotel Torino. Very central, as promised in the writeup on TripAdvisor’s Parma forum, and my room faces a courtyard so should be nice and quiet (if not large and spacious) — providing no more tipsy Englishwomen choose to have lengthy late night telephone conversations facing their windows. No in-room internet as I’d had (for a price) in Paris, but a reasonable connection in the lobby, free for the first half hour.

It was a long trip from Paris yesterday, and a grey and wet one despite a few glimpses of blue sky on departure. I left the hotel about seven-thirty in the morning – having left the nice young man at the hotel laughing and shaking his head in delight at the idea of anyone going off to study food in Italy – and threw myself and my gigantic bags on the TGV service to Milan in good time. Alas it was not so TGV today. We limped along the tracks near Chambery until we ground to a halt in a tunnel. Periodic updates in French were not overly enlightening, although if my ears and tragic grasp of French did not deceive me, the reason for our delay was finally given as “leaves on the line”?? Whatever it was, it put us 45 minutes behind time, and that killed any chance of my making my connection to Parma scheduled for 20 minutes after arrival. By the time we got to Milan we were about an hour and a quarter late, and there was a terrifying throng gathered on the platform for the return journey.

I managed to get myself onto a new train, one of the first to board, and not a baggage rack to be seen (lucky for the health and safety of my fellow passengers I lack anywhere near the upper body strength and sang-froid to attempt to put these babies in an overhead rack) so I claimed a couple of spots for me and my bags – lucky thing as the car had filled to overflowing by departure time – passengers perching in the hallways. A kind man sitting next to me told me he too was getting off in Parma and to follow him. He raised a quizzical eyebrow at the heft and girth of my bags and quipped, perhaps you have brought enough for one day? He said he’d lived all his life in Parma and couldn’t think of anywhere better, that I’d like it: it is very quiet, the people are very nice, if you ride a bicycle people will wave you through, and yes it is the best food in Italy. And helped me haul my bags up and down stairs and rather proved his point about the kindness of the locals, I thought.

When I arrived at the hotel, around 7pm, the taxi driver pointed to the outermost unzipped compartment of my backpack and I thought uh oh now what was in there.. probably some light-fingered onlooker in Milano Centrale wondered the same, but fortunately my travel paranoia is such that all valuables were deep inside inner pockets, the somewhat trickier zip to the compartment holding the iPod wasn’t touched, and I think nothing has gone astray.

After checking in I realised I’d had nothing to eat since the edible but unremarkable panino sold me by the hatchet-faced woman serving what passed for food on the train, and happened upon a snack bar on Piazza Garibaldi, the town square. I had a large and welcome salad with a gorgeous glass of red wine, gazing out at the flocks of cyclists – not a helmet or a reflective vest among them – and figured that was that for one day. 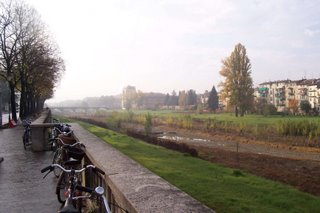 Torrente Parma – more a lawn than a torrent at the moment. 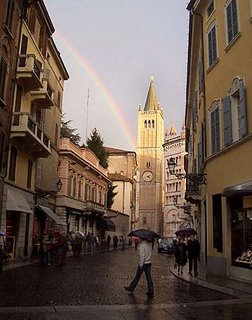 Today after early rain the sun came out to shine on a first ramble through my new home town. 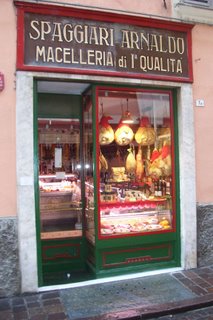