Thursday’s excitement was participation in the Focus on Farmlands conference, where about 180 interested parties, younger and older, got together to talk about farming, food, agricultural land trusts and ownership and where to go from here. Presented by the tireless souls of LifeCycles, including Linda Geggie, 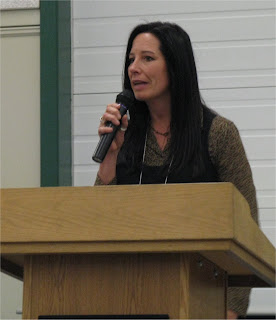 it was a stimulating day of discussion with participants from many different areas: lots of farmers, a good selection of elected officials at several levels of government, and some fringe-dwellers like myself, there to find out more and connect with the like-minded. The topics ranged from farmland trusts, community farms and other models of land access, to farm status and assessment, to political strategies, to urban and traditional methods of growing food. There was too much for any one soul to take in, so LifeCycles plans to post information from the sessions as soon as they can get it onto their website. Video footage from sessions and interviews is being posted on www.farmlands.blip.tv

We began with some prayer and drumming from Scott Sam, of the Tsartlip Nation 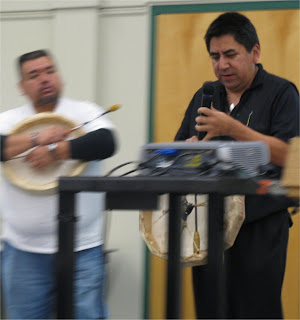 and then had a briefing from agrologist, farmer and BC Agriculture Council member Niels Holbek who had many interesting statistics to share, including some on farmland loss from the American Farmland Trust and the Farmland Preservation Research Project at the University of Guelph; and a local stat that came up several times through the day: 3% of the province’s land has both 80% of the population and 80% of the province’s gross farm receipts; not a good formula, observed someone, should there be a food security crisis, and the reason why there is so much competition for the same land for farming and housing. 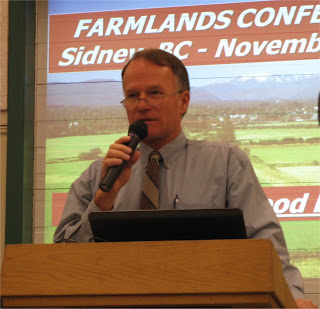 We then broke into workshop sessions. I went to the one called The “Regional Food Basket” – Looking Beyond Farmlands, where we heard from two members of the Tsawout Nation, JB Williams and Earl Claxton Jr, who are working to restore first nation ties to traditional food sources and culture; observing that their populations had been devastated by the introduction of some foods and the loss of others. Lee Fuge of Food Roots talked about pocket markets and the distributors’ warehouse space they share with Share Organics and LifeCycles – but she then had to dash back to the kitchen to make sure our lunch wouldn’t be delayed. Melanie Sommerville of LifeCycles threw a few more numbers into the statistics pool: about 80% of Canadians now live in urban centres; 84.5% do so in BC, with just over 50% of the province’s population in the Victoria and Vancouver regions combined. There is a lot of interest in growing food nowadays – local seed selling has tripled this year – and there are many great examples of local urban agriculture projects – the Fruit Tree program, the Sharing Back Yards program, HomeGrown Gardens, Growing Schools and Spring Ridge Commons. Deb Heighway talked about SPIN farming in Victoria, and recommended the online resources which helped her join the 2000 others worldwide who are farming in other people’s under-used back yards.

In the afternoon I attended the From Ideas to Action: Farmers and Eaters Taking Action on Farmland Issues workshop led by David Mincey, 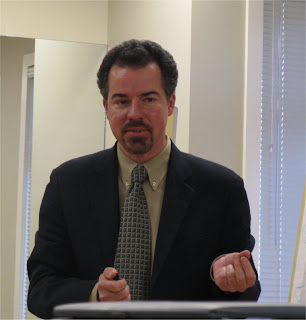 whose Camille‘s restaurant has long been known for its use of local products.

He was joined by fellow restauranteur and Island Chefs Cooperative member Ken Hueston, whose Smoken Bones Cookshack sounds worth a visit. He talked a bit about ‘food trending’ – which is a bit of a vicious cycle, where flavour-of-the-month foods get over-promoted at the expense of variety and honest experimentation by restaurants. A veteran protester (he’s only recently been allowed back into Safeway where 10 years ago he kicked over a display of Mexican corn when there was a local farm visible out the window) he made another good point to do with consumer demand: if we simply go on accepting only 5% local produce in our supermarkets, there’s no motivation on the part of supermarket buyers to change their sourcing. Next to him was David Chambers from Madrona Farm, 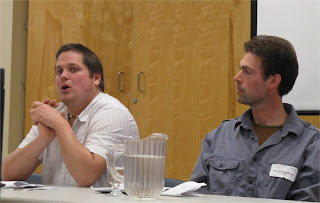 who spoke persuasively and from personal experience on the idea of channelling what farmland we have left through The Land Conservancy, so that it’s preserved for agricultural land in perpetuity, and not loosed to the whims of marketplace when farmers retire. His family farm is in the process of being bought by TLC who – if the needed funds are raised by July 2010 – can assure its future better than the Agricultural Land Reserve, which has proven itself unequal to the forces brought to bear by speculators and developers, and which protects relatively little of the most fertile land in the province, down here in the southern third where all the people want to live. In fact, as Niels Holbeck had told us at the start of the day, 90% of the land included now in the ALR is in the north of the province, and 70% of the lands excluded from the ALR are in the south.

Elmarie Roberts gave a primer on what community support for agricultural land can do, from her experience at Haliburton Farm, which is one chunk of land rescued from subdivision and property development by the local council, and protected by its nonprofit status. She’s one of six farmers who’ll be bringing in the veggies for thirty lucky supporters of their Community Supported Agriculture program. She said that in its purest form, a CSA helps to fund the farm’s operation by small scale investment by members of its community, and its members also work the land alongside the farmers. Here, though, it’s a pick-up scheme that provides a selection of seasonal fruits and vegetables to members, with volunteer work parties picking up the slack in weeding and field work. To her right is Lana Popham, 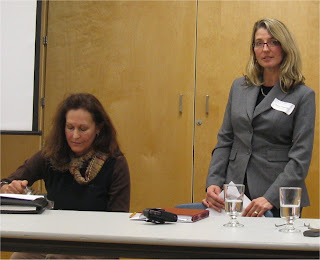 whose family runs the Barking Dog organic vineyard (and makes a rather special local gin!) and who is running for a seat in the next provincial election. David Cubberley 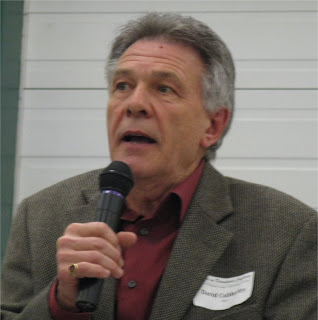 is already there (and put his money where his mouth was by laying down a significant donation to the Madrona Farm purchase fund). He talked about a few of the ALR properties that were topical at present: Panama Flats and Beckwith Farm, both owned by developers claiming to want to grow organic blueberries – I guess they’ve really turned a page in their career books – and he ran us through the political history of Haliburton’s acquisition; it had been owned by the water board who had been sorely tempted by developers who were only stopped by a group of active and well organised community members. 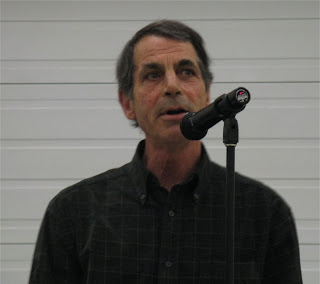 He’s retiring after 25 years in politics, including stints as provincial Agriculture minister and most recently Agriculture critic, and he wanted to share some insights into motivating politicians. He urged people to start showing up at council meetings, to organise into large enough audiences that politicians would have to come and answer to us: “We don’t listen to small groups of people who don’t all live in the same constituency.”

Food, he said, has never appeared on the agenda of any party meeting, any poll, any election in this province; there are no farmers elected to the legislature: and that is why there is no food policy in this province. Someone has to educate the politicians, he said, and a crisis point such as the one we’re in is the best time we’ll ever have to keep them focused on food as an issue; without focus, no action.

Words dear to my heart: “The drug of our time that dissipates focus is television. If you want to keep focused through the next election, don’t watch television, don’t get distracted by what the television stations tell you are the issues.”

He pointed out that BC pays less to support its farmers than Newfoundland; that it would cost $143 million to bring the province to an average rating, compared to other provinces; which amount is .4 of 1% of the annual budget, or $1 million less than tax breaks currently awarded by the government. He wasn’t talking subsidies, which he feels promote bad farmers and bad food, but there are all kinds of ways to support farming other than subsidies.

He said if we were looking for something to ask for in the next election, how about voting for the party that votes to end exclusions (from the ALR): but only if that party also supports farmers: “You can’t protect the land and abandon the people.”

And of course we ended with food: provided all day by the resourceful crew from Food Roots, including apples 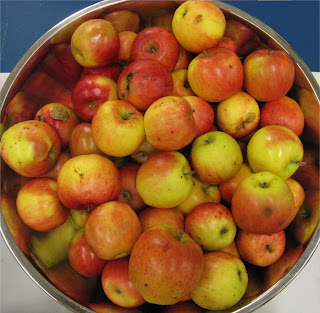 from the Fruit Tree Project. I had to skip out smartly so missed the wine and cheese which featured beverages from local brewers and vintners and Natural Pastures cheeses.