One of those cases that has dragged on for years is an interesting study in evolving technologies. When freelance writer Heather Robertson launched her case against the then Thomson news corporation in 1996, it was early days in data management. Newspapers were racing to put their wares online but left the agreements with writers behind; they reproduced articles without permission or payment and sold them through online databases for a fee that they did not share with the writers of those articles. It was the forerunner of Google’s “disregard copyright now pay later” approach to electronic publishing.

And it marked, in Canada, the beginning of the long slide downward for writers’ earnings. In a world where consumers of words are as guilty as consumers of food in making our decisions on the basis of price alone, we are all implicated in wanting something for nothing. But food, like words and music, is not created from air by air; the living beings who make these things also need to eat, and read.

Hence, in the wake of the Google Book Settlement (with its newly postponed opt-out date moved to September) a recent warning to Canadian writers from the Writers Union of Canada against accepting paltry payment clauses for electronic rights in book contracts:

It has come to the attention of the Contracts Committee that a number of publishers have been launching electronic book and print-on-demand initiatives. These publishers are encouraging writers to participate in their projects and are offering royalties for e-book sales at rates from as low as 10% of net sale price.

The Contracts Committee thinks that 15% or 25% of net or even of retail is unacceptable.

The Committee’s additional concern is that these initiatives may lock up both your electronic and print rights for your book with the publisher more or less forever.

The Robertson vs Thomson case has ended well for writers, and is heading for a settlement hearing on the 16th of June, in Toronto, to ask for court approval of the $11 million tentative settlement. The results could affect a great many writers, not just those in Canada.

There’s a new place to shop: Farmers’ Market Online has links to Canadian producers who are selling food and other products online. Here’s a little pep talk on why people like to shop at non-virtual farmers’ markets in Britain. Here in BC, we have a healthy looking list of farmers’ markets; in Victoria, we have a good selection of mini-farmers’ markets, which we call Pocket Markets, available thanks to the work of a group called FoodRoots. Here’s a Pocket Market toolkit for setting up your own.

And if you want it to be right in your own garden, perhaps you were one of those seen mobbing the Compost Education Centre‘s annual organic plant sale, 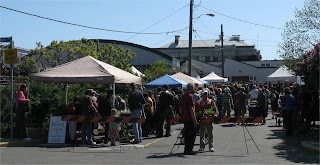 where seedlings of many stripes were finding new homes on a perfect day for planting. Not so perfect for attending a book festival; in a scenario wearily familiar to all published writers, Dvora Levin, 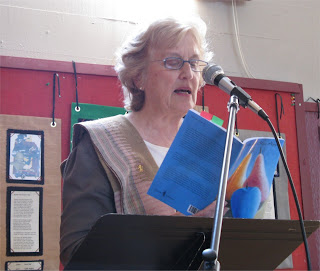 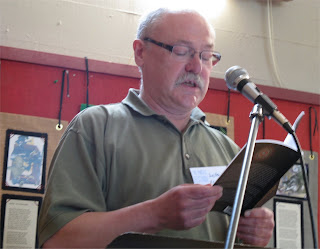 and I read to two audience members (both of whom I believe were related to Walter). So we simply broadcast our poems a bit more forcefully out into the roomful of booksellers and publishers who were chatting amongst themselves or with visitors. A couple of them gave in and listened appreciatively. Better a captive audience than none at all – though that might not be the captives’ perspective.

Though I’m always happy to give readings, in this case I’d only been invited on Wednesday, and the program was being changed on the fly (the readings lineup was different on the day’s printed program than what had been up on the festival’s website the night before). Poetry readings are always a difficult sell, and some are undoubtedly promoted better than others. Having more than two days’ lead time to publicize this event might have helped. But a sunny Saturday afternoon was always going to be a tough one.